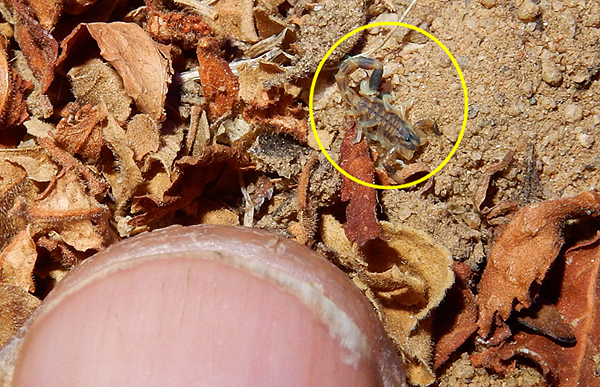 Why does a miniature scorpion in Samburu remind me of one of the world’s greatest paleontologists?

When Richard Leakey published The Sixth Extinction nearly a quarter century ago, many disparaged what they contended was just another publicity stunt in the then ongoing personal wars between paleontologists who were finally getting their air time with Oprah.

Perhaps it was. But it was also a bold rebuke of a scientific community reluctant at the time to admit climate change and all its nasty ramifications, including accelerating species decline. The book’s central theme was about hominins but it had plenty of general data regarding all the beautiful things on earth that we were losing so fast.

So what does this all have to do with Neobuthus kloppersi?

Leakey’s book was centrally about the five times before in earth’s very long history that huge numbers of species disappeared quickly.

“Quickly” doesn’t mean what you think in geological terms, but what is certain is that five times before up to 90% of earth’s living creatures were lost quickly enough that we know it was because of a certain event.

What were those events?

Well we’re not completely sure, especially about the first one 375 million years ago when 75% of all earth’s life was wiped out. But the other four seem pretty clearly to be linked to (1) super volcanoes, (2) asteroid collisions, (3) methane leaks from underground and (4) quick falls in sea levels.

I think everyone knows about the asteroid that crashed into Mexico killing off the dinosaurs (and 76% of all earth’s species). That seems to be the only direct extra-terrestrial slaughter.

Scorpions are among the oldest and most durable of arachnids, which of course includes spiders and other predatory insects. In fact they probably evolved before spiders going back 430 million years ago. In other words, they have outlived all the previous five die-offs.

Not erupting volcanoes, sunken seas or mega meteors could remove scorpions from terra firma. In fact, scorpions have prospered! To date we have just under 1800 species of which nearly 1400 have probably been around for 430 million years!

I think it’s clear that the last character disappearing behind the credits of every apocalypse movie should have a stinger at the end of its tail wiggling menacingly over its back.

The South African manager at one of my favorite lodges in Kenya, Saruni Samburu, discovered this new very tiny scorpion. He recognized it as in the family of Neobuthus which had never been found outside Somalia or Ethiopia. Those borders are about 200 miles to the north and east but those 200 miles become much more arid and desert-like, a true ecological barrier. The question was whether a previously known version of a Somalia scorpion had expanded its territory over this barrier.

But no, a Czech expert meticulously dissected the creature then decided conclusively in December that this is a new species. Johan Klopper is the lodge manager, so the little creature got his name!

So in this wretched geological time, when according to EarthDay we are losing species up to 10,000 times the normal rate, it’s nice to learn about Neobuthus kloppersi and probably time to get cordial and learn all about his greater family, among the first and maybe only survivors of our struggling earth.