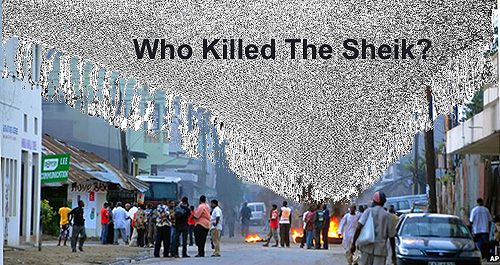 An awful restraint hangs like a veil over Kenyan journalism today, as civil disturbances continue in Mombasa and Wajir.

In neither area is the trouble as widespread as some international media have reported: the heavily read International Business Times reported “absolute chaos in the city” of Mombasa, which is absolutely untrue.

In fact the disturbances are pretty confined to a four-block area. And in Wajir, the curfew comes as a preventative measure, not in response to growing turmoil.

Nevertheless, I’m concerned at how the mainstream Kenyan press is suppressing coverage. The Mombasa disturbances are as a result of a radical Muslim cleric, on bail but not allowed to leave Kenya for terrorism related charges, being killed by unknown gunmen Monday.

In Wajir two different ethnic groups are in the middle of a spat of revenge killings.

These are two extraordinarily different types of social unrest. The Mombasa trouble is linked to the global war against Islamist terrorism, of which Kenya is an enthusiastic supporter having invaded Somali last October.

The Wajir trouble is ethnic, sparked by dwindling resources.

But my concern is that rather than deal with it robustly as Kenyans normally do, the intellectual center in Nairobi is simply not discussing it.

The city’s major newspaper is providing coverage, but it’s off page one, and the Daily Nation’s battalion of excellent bloggers has ignored both issues completely. But the city’s energetic radio stations, which also provide online coverage, said nothing about Mombasa, today.

The situation in Mombasa is much more serious than Wajir, because of its impact on tourism. Mombasa is where a dozen charter flights weekly arrive with European tourists for Kenya’s world-famous white sand beaches. Half of all Kenyan tourists never see an animal; they’re beach bums.

This will undoubtedly be seriously effected, just as bookings for the important end of the year holiday season become finalized.

And I would be one of those travel consultants who would be telling his clients to go elsewhere this year.

So that’s the likely explanation for the press’ restraint. But it’s not worthy of Kenya’s strong history of truth-seeking and long legacies of critical discussion and self-introspection.

If Kenya falls into denial to deal with its problems, it will surely fail. There are extremely important questions to be explored about the current travails in Wajir and Mombasa.

The most obvious is who killed Sheik Aboud Rogo? It was a typical 1930’s Chicago gangster drive-by assassination. The sheik was speeding in a car taking his wife to a doctor’s appointment when gunmen sped up behind him and sprayed the car, killing him.

One could immediately speculate it was America, trying for months to get the Sheik out of Kenya for trial elsewhere. But it is much more likely a completely internal crime, a Kenyan battle that involves the new and complex politics of leading up to the March elections.

A near internecine battle between the front-runner in Kenya’s presidential race, Raila Odinga, and an arch rival, Miguna Miguna has stirred ethnic and religious unrest throughout the country as Miguna goes campaigning. Miguna has interjected Islam/Christian – Terrorism/Anti-Terrorism into the national debate which disarms many in Kenya’s political elite.

It’s a touchy issue to be sure, but Kenyans have never shied away from dealing with the big issues head on.