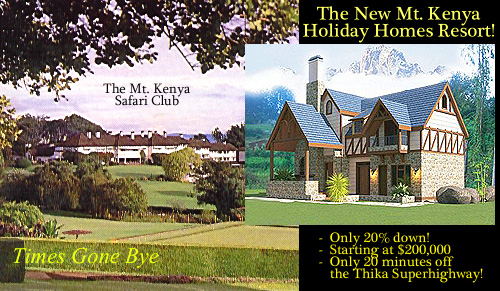 Not too many years ago, the Mt. Kenya Safari Club was the magic that made a safari. Today it’s just another resort off the Thika Superhighway.

Bidding has opened for 95 of the quarter million dollar residences on the Mt. Kenya Holiday Homes resort, located hardly spitting distance of the Safari Club. Each of the ultra modern 3- or 4-bedroom homes in two or three stories has a fireplace, and is powered and heated by solar panels.

The 123-acre complex is being marketed to city dwellers who long for a second country home, in a perfect location for weekend hiking, bird watching, trout fishing, horseback riding and that occasional golf.

There will be a perfectly manicured 9-hole golf course, and the entire complex is secure by a big game proof electric fence and mini-moat to keep out those wandering buffalo. But if you yearn for wild animals like zebra, lion, elephant and so forth, don’t worry. The resort is just south of the Sweetwaters Ole Pejeta private reserve, famous for its abundant big game.

When Kenyan safaris first became popular to Americans in the 1970s, trepidation was introduced into hard-earned holidays, and the “adventure vacation” was born. And to be sure back then, we knew lots less about malaria and how to prevent it, many of the roads were hardly tracks, and most of the night time lodging was in very basic tented camps with shared toilet and shower tents.

More than once I took my safaris far enough into the bush that we would encounter locals who had not often seen visitors. It was never certain how these meetings would develop: friend or foe. And about the same time police were being appointed to far out places, and it was always certain we’d be delayed for a bribe.

And quite different from what you might expect, the game was hard to find. There was actually more of it, of course, but it was very skittish of people. It wasn’t really until the 1980s that Kenya’s highland game was approachable enough to take good pictures.

So what game we did encounter evinced the old “fight or flee” syndrome. On my very first safari at the age of 21 on my very fast game drive I was charged and hit by a rhino. In my first decade as a safari guide I had tusks through floorboards, was rolled in my tent by an elephant, escape charging lions, had a woman faint to a bellowing buffalo and watched two lovely ladies scream while being charged by a hippo.

And every day was very dusty and very dirty and the evening’s ice cold water for showers was manna from heaven. And even the finest Chicago debutante appeared at the evening camp fire looking like Miss America.

In those days you didn’t race over to Kenya and back for a 12-day jaunt. Most safaris were 22-26 days long. And by the third week, I would definitely notice “adventure fatigue.”

That was when we’d arrive at the Mt. Kenya Safari Club.

Frankly, in the 1980s, the Mt. Kenya Safari Club was hardly more than a nice Holiday Inn on well landscaped grounds built around a central Victorian mansion. The fact was that there were similar homes in the Kenyan highlands, but kept well under the radar, because they were owned by old white colonials still lying low. So to a visitor the Mt. Kenya Safari Club was the most unexpected and amazing jewel in the crown of an adventure safari.

It cost about three times what other night’s lodging cost. The plumbing always worked. Usually, there was hot water. The food, all local, was fabulous, and the old colonial woodworking, Victoria furniture and servants clicking heels became a sort of Colonial Theme Park.

There was a Members’ Dining Room ostentatiously separated from the guest dining room, and membership (open to all) cost about $500/year. The President of Kenya was one of the few black members at the time. (He was one of the few who could afford it.)

So your richest and most resplendent clients were advised before departing home that William Holden, the principal investor of the Club, would welcome their “membership.” And by so doing on those few nights under Mt. Kenya, you would remove yourself from the grand guest dining room and be escorted by the Maitre D’ into the exclusive members’ lounge.

Back then $500 was about a third what a 25-day safari cost! Using the same metric, today, you can actually make the entire down payment on a 4-bedroom, 4-bath luxury home with a fireplace!

The grand if palatial public areas of the original Safari Club were all deep wood plastered with big game trophies. The Club was originally designed as a hunter’s retreat by William Holden and friends. As photography safaris grew much more popular, the board had no trouble pivoting into the modern age.

Today the Safari Club is a Fairmont Hotel. Its revenue stream is now less than 50% from tourists, attracting Kenyans from the city for a weekend holiday.

And no longer unique, there is nothing here different from other nearby resorts like the new Mt. Kenya Holiday Homes except some very precious nostalgia.