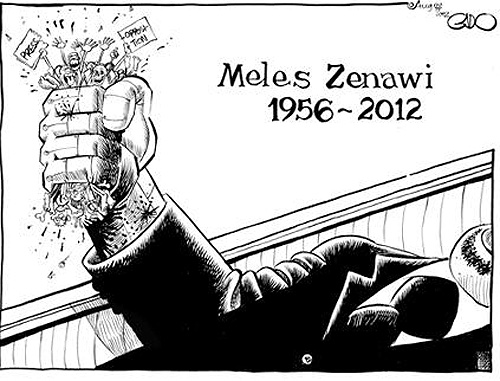 Last week’s death (unusually of natural causes) of Ethiopia’s strongman Meles Zenawi is an unique opportunity for America to reflect on its impact in East Africa, if not the whole of the developing world.

Meles was one of the most ruthless dictators in the world. He was also heavily supported (argue, “propped up”) by the Obama administration. This contradiction was justified because Meles was also instrumental in the War on Terror.

America’s Wars on Communism and Terror and Drugs have governed our policies in Africa for more than a century. The question, now, is whether we are mature enough of a society to throw off these archaic shackles usually described as “self-interest.”

Cycle One: The War on Communism

In 1960-1962 during the presidency of John Kennedy democratic movements throughout the Congo were quashed and its leaders assassinated paving the way for the continent’s most famous and longest serving tyrant, Mobutu Sese Seko.

In 1993-95 during the presidency of Bill Clinton democratic movements in the Congo and Rwanda were abandoned to chaos paving the way for seemingly interminable war and ethnic conflict.

At the time the rationale for abandoning Africa to dictators and mayhem was that there was nothing consequential to America in Africa at the time worth fighting for. The Cold War was over

Cycle Three: The War on Terror

Today, 2010-2012, under the presidency of Barak Obama strongman regimes in Rwanda, Uganda and Ethiopia have received huge amounts of military and development aid paving the way for ruthless dictatorial regimes violating all sorts of human rights.

Today’s rationale is that the War on Terror is going pretty well, and especially well in The Horn of Africa.

Lesser acknowledged but well known is the American Right’s involvement in all three of these cycles. Until the current cycle it was principally from church missions and was admittedly less significant. But during this latest cycle, the involvement of DC’s Church Street and other evangelical groups most prominently in Uganda has been well reported.

The contradictions are explosive:

The most incredible one is that while President Obama has inched his own country away from homophobia quite successfully, his administration piles enormous support on the Ugandan regime which is still trying to pass legislation that will execute gays for being gay and imprison nongays for not revealing that someone is gay.

And there are many more: no military involvement in Libya or Syria, but already a brigade of green berets in Uganda and the CAR; and tax to death or forbid U.S. corporations from extracting coltan and other precious metals from the troubled DRC, but laden Rwanda with extra development aid to build local industries that do just that. 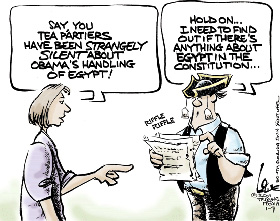 This is not a Right or Left affair, although it seems to always be initiated by Democrats and then massively supported by Republicans that follow. And it is not a Left versus Right affair, either. The fact that Democrats in power are essentially promoting the same thing as evangelic Christians funding movements in African backrooms is clear this is not a Left verus Right affair. It’s a power thing.

It’s ends justify the means. It’s Kissinger’s self-interest dogma. It’s we do what works best for us, irrespective of morals, ethics or human rights. It’s been the way of the world for centuries.

And so we endure Cycle Three: Museveni in Uganda, Kagame in Rwanda and whoever will be Meles’ successor in Ethiopia are all ruthless dictators. Together with American drones, the War on Terror proceeds just hunky-dory.

All hail the African Strongman.