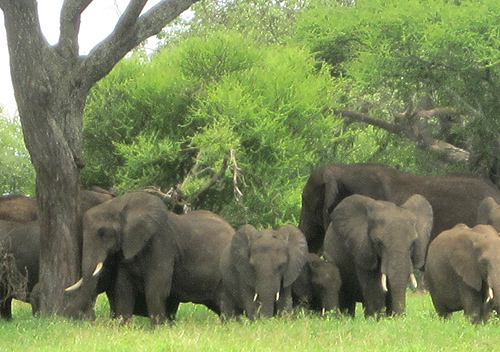 Tarangire proved as exciting as I expected, and we dodged the heavy rain, and as a result we achieved the optimum experience of the year for this wilderness.

You can go on safari virtually at any time of the year to East Africa and with good planning have the most memorable trip of your life. But if you’re willing to gamble a bit – which my clients don’t realize I’m always doing with their trip – then you can bingo out marvelously, and that’s what happened to us in Tarangire.

I like traveling during the rains, and I try to do so just before the heavy and debilitating rains start, and that’s the gamble. And in fact this year heavy rains have started .. early, and so stay tuned to see how the rest of the trip might unfold.

But what it means for Tarangire is that the most beautiful landscapes in Africa have been created. The great sand rivers flow, the white tissue paper flowers explode in the beautiful grasses next to the yellow hibiscus and purple mini-dahlias and the landscapes in the sky are overwhelming: sculpted by a storm forming over there and giant cumulus over there.

And, most importantly, the animals are at their supreme. Everybody’s fat and sassy. So we saw the four grand lion brothers with big bellies and magnificently washed black manes. We watched a male leopard stretch out his own belly in the morning sun. And of course for Tarangire, we watched and watched and watched elephants playing and fighting and vying for position.

We’ve been here hardly a full day and our elephant count is approaching a thousand. At this time of the year when fewer tourists come and the veld is fulsome with food, there are many playful babies and many great bulls fighting to mate.

And Tarangire is anomalous, magnificently wonderful for its sheer numbers of ele but they become so dense particularly now that their normal behaviors begin to break down.

Families mix readily. Teenagers form gangs and often wander far from the family, and I often wonder how they matriculate properly. With normal behaviors young males are kicked out of the family between 10 – 12 years old, and they must immediately associate with an older male that teaches them how to behave.

This was discovered sadly several decades ago when authorities in the Pilanesberg reserve in South Africa imported a score of young male ele who hadn’t been matriculated by older males. They killed quite a few of the other animals before they were corralled in and scientists began to study what had happened.

And that was when it was learned how important the mentoring of a younger male by an older male is. But in Tarangire the groups are so dense and the age groups often segregate together that I just wonder if there’s been any science about mentoring in conditions like these.

The roughly 3700 ele in the “northern sector” of the park are mostly resident. And we saw nearly fifty hardly fifty yards from the park entrance as they were mingling about staff quarters. These are wholly habituated animals that rarely leave the park, much less this small area.

But as we moved south to our camp, we saw the truly wild and magnificent wilderness elephant. On two occasions (since we were using the same tracks) a tailless female stopped us and really threatened us.

My clients behaved wonderfully. Not a whisper was said, and when she asked us to back up, we did slowly. But we persisted within her area of irritation, and eventually each time she let us pass.

But altogether we’ve seen nearly a thousand, playing in relatively deep pools at the side of Silale swamp, wallowing in mud, mounting in courtship, trumpeting playfully and in the expected aggression that is generated by so many animals living so closely together.

As you’ve read in other blogs, I think there are too many elephant in East Africa. And the sad part of the story were all the dead forests growing further and further from the main transit passes in the south. Trees killed by elephants: forests turning into savannah.

And of course the growing human/elephant conflict, perhaps the single greatest issue in the natural history world of East Africa today.

But like any gamble, the gamble nature is presently taking sustaining so many elephants is exciting to behold. We only hope the outcome is not a loss, but a win. And frankly, I don’t know either how to call how it will be, or how it could come to be.

But we experienced it, because we gambled with the weather and so far won.