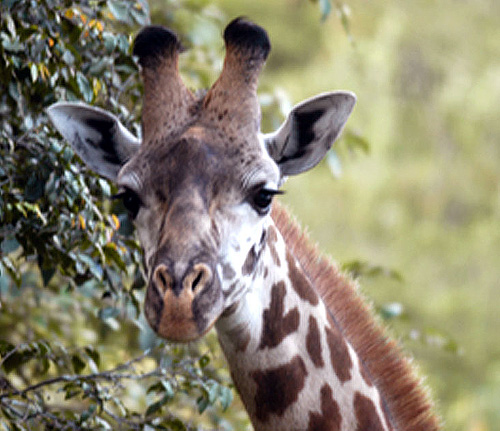 There are few true big game reserves so close to large metropolitan cities as Arusha National Park, and it’s holding its own against an onslaught of peripheral farms and shops.

The park was exceptionally green and beautiful and lived up to its reputation for us as “Giraffic Park.” We probably saw 100 giraffe in the course of the afternoon game drive.

There are no cats, and elephants use it strictly as a corridor. We saw evidence of elephant but no animals. What we did see was the usual and beautiful groups of zebra, waterbuck and warthog, with the frequent peppering of lovely bushbuck in the sides of the forested hills.

But we also had a stroke of incredible luck and saw quite a few smaller forest creatures, including the spectacular colobus monkey with its gigantic white flowing tail. We saw a family of 20 grouped in a single tall tree in the distance – in the middle of a low bushland that I’m sure was of little interest to these strictly arboreal monkeys.

But perhaps they were enjoying afternoon tourist sightseeing!

And the grand find of the day was the red-flanked duiker. I personally haven’t seen one of these in Arusha for over ten years, and it’s just the type of species that is threatened both by elephants destroying the forest and human development on the outskirts.

We caught only a glimpse of it, but everyone in my car did see it, and it was really a joyous event recognizing that the forest is still holding its own. We also saw quite a few suni, another smaller but less endangered rodent/antelope and of course, the ubiquitous dik-dik.

But the farms are encroaching, and we literally drove on the edge of a corn farm on one side of the road and a meadow with giraffe and waterbuck on the other. There were regularly spaced new blue tents throughout the field, with machete armed lookouts to protect the crops.

That’s the challenge of Africa’s wilderness, today, to become relevant, meaningful and productive to African populations. Arusha’s holding its own, and it was a lovely first game drive in Africa for my clients.

And what’s more: never discount the little bits of wilderness that remain, either because the pressure to develop them is so large or because their size jeopardizes their being able to sustain real biodiversity.

The pressures on Arusha are enormous. And with extreme weather, like last year’s drought, I become certain that it won’t survive. Then the rains return and the wilderness flexes its muscle and shows us animals (the duiker) we haven’t seen for years.

Nature is resilient. That shouldn’t make us less vigilant, but we should respect and admire its own healing itself.

Arusha National Park is the perfect example of this.