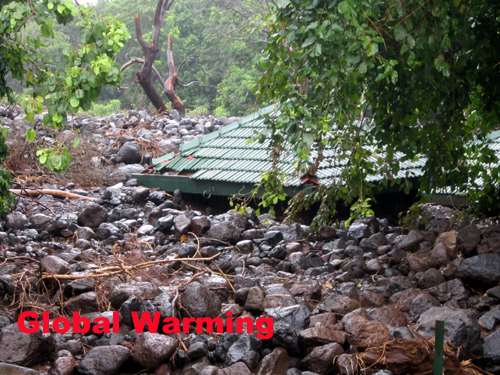 Global warming is devastating earth, and it ruined a day on safari and possibly ruined one of Tanzania’s best game parks for a long, long time.

Worldwide weather is become more and more extreme. In East Africa we have more droughts that are drier and more floods that are heavier, and the frequency at which both occur is mind-boggling.

The developed world is of course no less susceptible, but we have more resources to deal with it. When Super Sandy crushed America, we were able ultimately to deal with it by rebuilding.

But the developed world just doesn’t have those resources.

Four days before we were to visit Lake Manyara National Park, unbelievable rain causing flash floods that no one could have anticipated swept off the Great Rift Valley over the park and poured into the entry gate.

A beautiful visitor’s center with its wonderful little museum, gift shop and toilets were submerged in mud and when the water receded, covered and surrounded by boulders that had fallen from the Rift.

Four days before we were trapped by the same heavy rains in Tarangire National Park, as the only bridge to the outside world had been submerged by a raging river.

I quickly chartered airplanes to fly us the short distance from Tarangire to our next destination, Gibb’s Farm, but my four vehicles and drivers had to wait by the river until the waters subsided.

We knew the waters had subsided somewhat when we were ready to visit Manyara, so we decided to head out to the park early in the morning. It was dry enough, although the scene was so sad.

All the public buildings were buried in rocks and mud. But the road into the park was now dry, and so I thought we’d be able to visit this gem. But the ranger said no. They were too concerned that another flash flood was in the brewing.

So instead we went into Ngorongoro, enjoying an unexpected second game drive in this wonderful park (see tomorrow’s blog for information about those game drives). 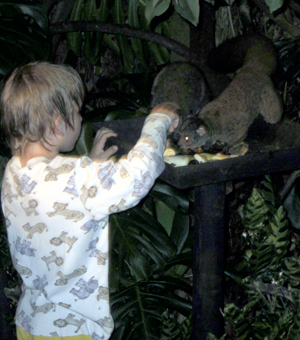 We couldn’t have chosen a better place to stay for this trauma than Gibb’s Farm. It’s one of my favorite places on all safaris, and I use it as a base for visiting both Manyara and Ngorongoro Crater.

So we were there for three days. And one of the most wonderful moments came not with anyone in my group, but with many of them watching a 7-year old guest, Eli, as he closely encountered bush babies.

Gibb’s puts out fruit every night at 7 p.m. to attract the local bushbabies (greater galago). They’re a wonderfully curious primate with a very loud voice!

But no one but Eli ever tried to pet them. And guess what? They seemed to like it!