Skip to content
Our game drives in Ngorongoro Crater were exceptional, but in the course of my career they always seem to be. It’s an absolute wildlife paradise.

We actually visited the park twice, because our game drive to Lake Manyara was prevented by terrible floods. But the crater although beautifully green had wonderful roads and tracks and we had no difficulty on two consecutive days. 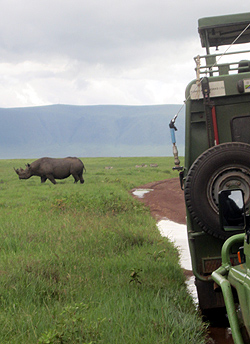 I get very upset when I hear people say they shouldn’t come to East Africa during the rains. That’s when they should come! The first half of the year is the wet season in northern Tanzania, and this is when the migration is most easily seen, when all the baby animals are being born, and when the veld is most beautiful.

We saw dozens of lion. The crater has among the highest density of lion of any wilderness in Africa, probably around 100 for the 102 sq. mile wilderness.

We saw the giant eland, probably thousands of zebra and wildebeest, and likely more than a thousand buffalo.

But I was specially pleased with how close we got to some of the last big tuskers that exist on earth.

During the horrible years of elephant poaching in the 1970s and early 1980s, a group of young males with very large tusks entered the crater for protection. The geology of the crater made the corporate poaching of those years virtually impossible.

The crater isn’t a good habitat for elephant. Elephant are browsers that prefer leaves and branches and bushes, but the crater has little of that – it’s almost all grass.

But they adapted and adjusted to eating grass. And so they were saved while their cousins and siblings were decimated by poachers. 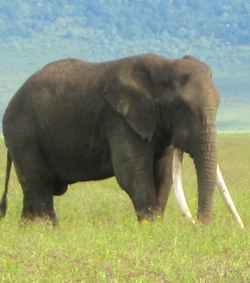 During those poaching years small tusks, or no-tusk elephants were passed over as the professionals sought the elephants with the largest tusks. Soon the global population of elephant was reduced to small tusked animals.

But the guys in the crater survived. They’re dying off, now, since they’re well into the 60s. And unfortunately, even after poaching ended, they didn’t leave the crater to mix with global herds, and the few females that now enter the crater don’t seem to interest them!

So it looks like these magnificent tusks will die when they do.