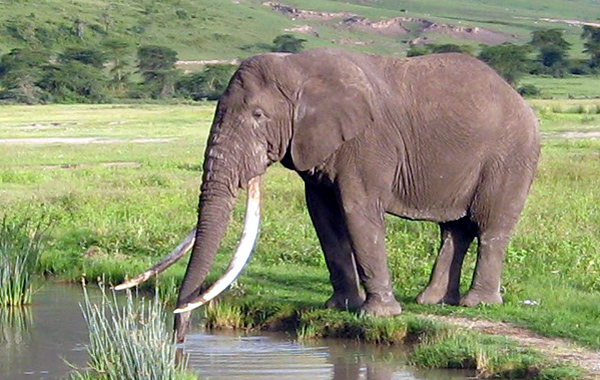 Last month one of the last known super tuskers died. The last time I saw one was in April, 2008. A “Super Tusker” is somewhat arbitrarily defined as an elephant with two tusks each at least 1½ meters long and each weighing at least 80 kilos. It was sipping water from a pool in Ngorongoro Crater.

Looking for super tuskers isn’t just a fun hobby. Elephant survival is directly linked to the size and weight of their tusks. Unfortunately, this is also the singular characteristic that attracts poachers.

Elephant need big tusks to dig for water in the many sand rivers that string across sub-Saharan Africa. This benefit by the way isn’t just for elephants:The deep holes they leave provide access to water in the dry season to numerous other animals incapable of digging that deep.

The tusks strip clay and other hard earths for salt. All animals on the veld but predators and scavengers have to find salt. The smaller the tusks, the more strikes it takes.

In the apocalyptic days of poaching, 1982-1986, the number of elephant in sub-Saharan Africa dropped from just under a million to less than several hundred thousand. In Kenya where until then most of the super tuskers lived, 95% of the original population of around 100,000 were wiped out.

I say “wiped out” because poaching in those days was messy. I’d go to the balcony of my lodge in the middle of the night and listen for the vum-vumz-vum-vumz of the Sikorsky’s arriving from the end of their long journey from military style naval vessels off-shore, or from bases in Djibouti, Kisanji or Sanaa.

They’d hover over a family of ele, throw giant spots on them, and then based on the seconds-long analysis of whether the tusks were big enough, bazooka the animals to smithereens.

The Sikorsky would land. Flood spots on poles would be set up and the harvesters would begin investigating their slaughter. I’d sometimes be close enough to hear the chain saws as the tusks were removed, packed up into the helicopter, and then off they went into the night.

We’d game view in those areas the next morning, because there would be all sorts of predators and scavengers around, and often lots of tusks were left behind. Presumably they weren’t the best ones, but sometimes it was rather striking how much ivory littered the ground.

It was a crude but effective way to get a lot of big ivory. I don’t know how sophisticated their technology aboard the helicopters was, but I presume they had good night lenses with some magnification. I did notice a few times when after the spots turned onto a family of ele, the helicopter then flew off apparently deciding the haul wasn’t big enough.

But by the middle of the 80s so many elephant had been killed that I saw less and less ivory left behind. Just before the implementation of the CITES treaty which ended this horror, it seemed like every inch of ivory was taken from every family blasted away.

The net result, though, was that almost all the big tuskers were gone. The few elephant left on the veld had very small tusks, or often only one tusk or no tusks at all.

But, of course, the poachers didn’t get every last one of the big ones. The reason my last sightings were in the crater was because during those horrible years a number of super tuskers went into the crater. The crater is not a good habitat for elephant.

The crater is mostly grass. Elephant need forests and bushes, but the several dozen or more super tuskers that went into the crater benefited from its geography: It’s very hard for a helicopter to hover over an area of 102 sq. miles depressed about 1600 feet into the earth without being detected.

So they learned to eat grass instead of leaves. What was particularly interesting about the crater super tuskers is that they were all male. That’s never really been figured out. In any case when the years of poaching came to an end and robust elephant populations started reappearing in the late 1990s, those old guys in the crater wouldn’t leave!

We don’t know why. Maybe they just got used to the paradisaical home free of all danger. At first we weren’t worried because lots of lady elephant started coming into the crater. But guess what? The old farts wouldn’t breed! They never went into “musth” again, a necessary pre-breeding condition that most elephants experience almost constantly.

So their genetic treasure was never passed on!

Well, the crater wasn’t the only place that ivory treasure survived. Kenya’s Tsavo national parks were another, and last month photographer Nicole Bonaccorso captured multiple beautiful images of the so poorly named “F_MU1″ just before she died.

We know there are others in Tsavo, too. Perhaps as many as 20-30 still survive, there. Two years ago scientists in South Africa’s Kruger National Park announced there were at least a dozen super tuskers there. In both cases these are healthy mixtures of males and females.

Female elephant nurse and are pregnant nearly constantly until the moment of their death, so there’s great hope, now, that big tusk genes will start doing their thing in today’s robust African elephant populations.