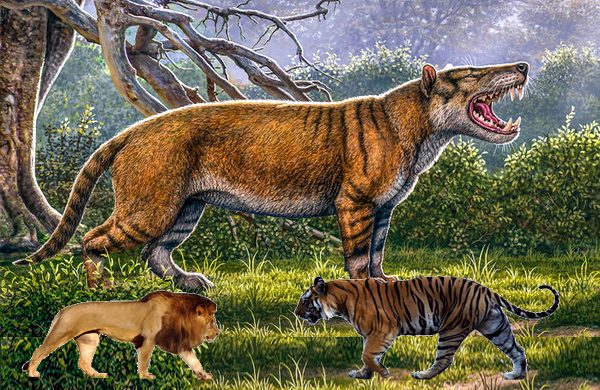 Sometimes you unearth amazing discoveries in the deep masquerading shade under an arch of limestone in the scorching fossil fields of a desert in Kenya. Other times it’s in the backside of a drawer!

What Ohio University scientists Nancy Stevens and Matthew Borths have discovered is no less impressive just because they didn’t get their hands dirty finding it! Intending to study the bones of ancient hyaenas tucked away in hundreds of drawers of the Nairobi National Museum, Nancy discovered the world’s biggest ever lion!

Simbakubwa was up to three times the size of current lions, bigger than a saber toothed tiger and likely bigger than a polar bear. It lived 22 million years ago in what is today East Africa when earth was in its heyday producing mammals.

Its bones were incorrectly placed in the hyaena cabinets because simbakubwa’s teeth are very much like hyaenas’, which are extremely unique.

To begin with this creature had more teeth than any other known prehistoric predator, and most of them were the size of bananas. They include several types of canines, not just one, and simply stated the mouth of this giant predator is the most efficient eating mechanism of any creature ever found: It could consume virtually anything: bugs, plants, meat and even crush and ingest bone.

By the time saber-toothed cats came along, 20 million years later, they’d lost much of this varied dentition. Lions (and almost all cats, including kitty cats) today don’t even have functional molars: they rely almost exclusively on teeth that tear and swallow.

Stevens & Borths’ discovery is important: “The evolution and extinction of Hyainailourinae offers important insights for interpreting ecological transitions from Paleogene to Neogene faunas in Afro-Arabia and Eurasia.”

Translation: The explosion of mammals which followed the meteorite destruction of the dinosaurs 65 million years ago started to end, if not contract, about 22 million years ago, just when simbakubwa lived. Why? Studying a transitional species like simbakubwa could reveal insights into why earth’s ecology was changing at this critical time.

What’s in the back of your grandma’s drawer?