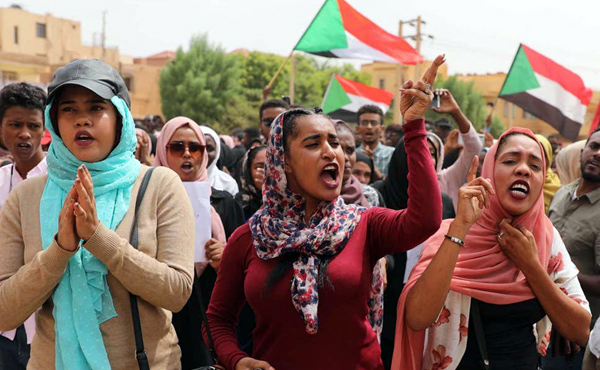 A few days ago in New York I sat down with someone deeply involved in The Sudan’s American diaspora, and I was stopped in my tracks when he affirmed with facile certainty that the diaspora thinks the current revolution will succeed.

But what do you think he said when I asked him to predict if Trump would be defeated next year?

Because Africa is younger, its institutions newer and more malleable, its societies changing more rapidly, the political and social events that occur there often presage America’s.

This thoughtful, highly experienced and deeply connected Sudanese thinks that Trump will be reelected.

Let me unweave the pattern.

The ancient kingdoms of The Sudan ended when the Ottoman Empire confiscated the territory in 1821 and held it until 1885. That was when Britain, assisted locally by Egypt, colonized the territory.

Britain held The Sudan until 1955. As with all its hastily created colonies, Britain divided the country politically and organizationally by tribe. This proved a disastrous strategy, because it further aggravated tribal conflicts.

But these Khartoum elite had to rely on the Army to achieve power, and Britain had always made it a point to populate the local armies with officers from around the country. Fighting continued for three years, mostly between Army units.

The chaos Britain ceded it had left behind motivated it to intervene. With the now well documented help of the United States, Britain organized the Khartoum elite behind the first president and dictator, Ibrahim Abboud. By 1958 he was firmly in control.

Because the country is so large and diverse, fighting never really stopped although it became mostly limited to the far south and far west. The Sudan was a perfect playground for the world powers during the Cold War, and huge amounts of weapons flowed into it but the Khartoum elite prospered and traveling in the Khartoum area during these years gave little indication of civil unrest.

But it was hardly a stable government, and with so much fighting in its hinterland, the human rights abuses grew from extreme to catastrophic.

In 1969 Britain once again intervened although much more subtly to install a new strong man, Col. Gaafar Nimeiry. Immediately turning on his British benefactors, Nimeiry abolished parliament and all political parties or activities. He installed himself as king.

These radical actions allowed eastern world powers to support a Marxist uprising, and that’s all it took for America and the rest of the west to get deeply involved and once again support a strongman who avowed anti-communism.

Nimeiry had to pretend to be prowestern, obviously. And his benefactors brushed under the table the incredible atrocities occurring in Darfur and the south, simply because this iron-fisted dictator claimed to be anti-communist.

The Khartoum elite got fed up with the arrangement and the people staged a revolution in 1985, just as the Cold War was ending and western influence was fading.

But that revolution didn’t turn out as the protestors had hoped. Exactly as had happened when the first strongman, Ibrahim Abboud, came to power at independence, the Army fought among itself for 3-4 years, western powers now prompted by their oil company paymasters stepped in and helped Omar al-Bashir become the country’s 3rd strong man.

Bashir was toppled earlier this year by “the people.” It was an amazing story led mostly by women and youth, and today there is a fragile coalition between the former military rulers and leaders of the demonstrations.

My New York acquaintance believes the coalition will hold and the people will prevail this time. We had limited time for me to understand why, but in a nutshell he thinks their success will ultimately derive from social media and youth.

In The Sudan today, social media is controlled by women and youth. Read my earlier fascinating blogs about this. In America…

…political social media is controlled by Russian bots. While there are very vocal youth groups, American youth in the main are not as completely politicized as in The Sudan.

So Trump will win, again.