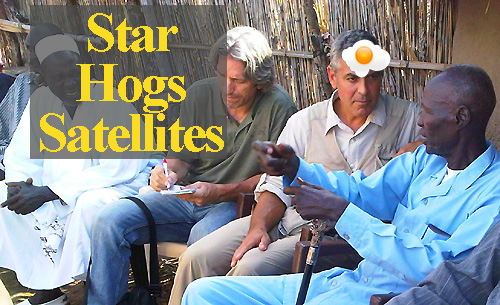 Half way through the referendum election process, the birthing of South Sudan is going well. Folks are voting, militias are firing, and U.S. celebrities have egg on their faces. (Or should I say, posho on their jowls.)

There is fighting along the proposed border near the oil-rich Abyei oil fields, and this should not be discounted but it is not yet significant enough to alter the ongoing referendum and certainly doesn’t presage George Clooney’s warning that a new civil war is about to begin.

The irony at the moment is that the two militias involved, Abyei’s Dinka Ngoc tribe, and the alleged attackers, the Arab Misseriya militia, began fighting not to disrupt the referendum but over who will be allowed to vote in a planned but not yet scheduled future referendum into which country (north or south) the disputed Abyei region should be assimilated.

Right now, neither the Khartoum government or the SPLA (the south’s military) are involved, and UN Peacekeepers are rushing to the scene as mediators. Clooney’s claim has some validity, and that is that the Darfur genocide has been conducted by militias as well, and it’s true that Khartoum often carries out its dirty work through militias.

But it just hasn’t reached the scale of Darfur fighting, not yet. And unlike Darfur, serious fighting in the south before the cease-fire agreement five years ago was mostly between the two armies, not militias.

Perhaps the greatest controversy is whether the presence of George Clooney and his battalion of friends and additional celebrities is good or bad. Read my earlier blog about Clooney and South Sudan.

The excellent NPR reporter, Joshua Keating, wrote rather disparagingly about Clooney, yesterday. His piece is very much worth reading.

The NGOs on the scene are very critical of Clooney. I had to stop reading most of the blogs, because, in fact, they started to become rather juvenile, although Clooney’s made-for-movie macho response is just as bad.

My feeling is that in balance Clooney helps, although as I said in my earlier blogs, I’m very concerned why this is true, and I very much worry that celebritizing a conflict might emasculate its solution. Once it’s no longer glitter and stars, the world could pull back the long-term and methodical support required.

Clooney and friends are probably overdoing it, now. And it’s the height of irresponsibility to warn of a war that at the moment really doesn’t appear likely. At the moment, I hope for the foreseeable future, Clooney has egg on his face in this regards.

And fortunately, for the moment anyway, the greatest heat in the conflict zone seems to be from the overwrought satellites as Clooney & Co. compete with Agence-France Press and World Vision for their use.