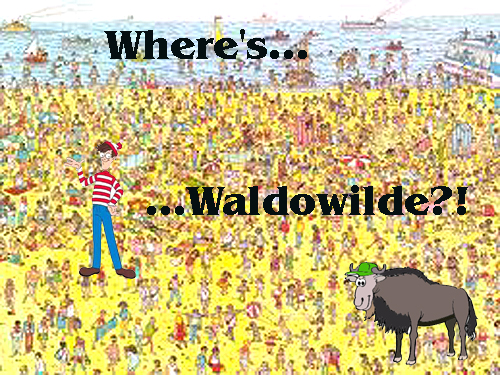 This week the Huffington Post said the “migration was delayed.” True. It was delayed. About as long as getting stuck in Chicago traffic delays a dinner engagement.

“I can assure you the raingods are smiling,” the owner/manager of Ndutu lodge emailed me this morning. “The animals have streamed back onto the plains!… Everything right now is sprouting, growing and sparkling with life!”

The Huffington piece was written by a very respected conservationist, Carl Pope, Chairman of the Sierra Club.

Pope’s problem is the same as any other tourist who believes they are Robert Burton searching for the source of the Nile. TripAdvisor is full of this nonsense.

“…gazelles are waiting on the southern grasslands, but the short rains failed this December. The million wildebeest that drive the world’s greatest wildlife spectacle have not yet scented enough rain to trust their destinies to the grasslands. The migration, which follows the rain, must also wait for it,” Pope writes.

I am fan of the Huffington Post and consider myself allied to anyone who calls themself a conservationist. I’m not saying Pope was lying. His mistake – a very serious one – is suggesting that his one brief perspective from one small area puts him in a position to make such gross generalizations.

It was not immediately clear where Pope had been, but I dare say he probably wasn’t there very long and didn’t have a very good guide.

The Serengeti ecosystem is nearly the size of New Jersey, but unlike New Jersey it lies nearly astride the equator. Weather systems are fabulously complex, there, and especially now with global warming.

There can be small pockets of drought surrounded by areas that are flooded. Right now the northern districts of Kenya are suffering another drought. Perhaps he found himself in one such small area in the Serengeti, but the overall Serengeti is just fine, and actually, quite normally fine.

Pope’s assumption in his article that the herds are drawn by the “scent of grass” or sensitivity to rain is uncertain; we don’t know exactly what prompts the migration. Moreover, grass disappears for other reasons than drought. It can be eaten. By cattle as well as wildebeest, a serious ecological battle raging these last few years at the edge of the Serengeti with Maasai range lands.

He also suggested as typical of a casual tourist that the migration is a single thing — entity — that either moves or not. A million animals does not a marching band make! They are often split up all over terra firma.

He said the “gazelles were delayed.” Thomson’s gazelle often don’t migrate. Some do, some don’t. I see literally tens of thousands of Thomson’s gazelle on the totally desiccated plains north of Olduvai at the driest time of the year, July and the first of August. These marvelous creatures don’t need to drink, and they survive quite nicely by eating the roots of grass.

Pope marked his visit in “December.” But the information I have for December was that light rains began over the grassland plains of the Serengeti December 18 and 19, and the following week saw normal rain patterns. This is about 2-3 weeks late, no more. There was then a let up at the end of the year, as is also normal, and now as the Ndutu owner explains, everything is beautifully green.

Blogs posted by other travelers and tour companies suggest that the bulk of the wildebeest moved through the northern part of the Serengeti out of Kenya as early as the end of November/beginning of December. Right on schedule.

Several weeks later, perfectly positioned to profit from the first rains of the season, the herds were mostly divided widely between the Kusini plains to the west and the Gol Kopjes to the east.

This is the real magic of the migration. Until these first rains fall germinating new grass, there is simply no understandable motivation to draw the large herds into the area. Yet they come, year after year after year. Many believe as I do that it is a homing instinct triggered not by “scent of grass” or of rain, but of a lack of grass whence the herds came.

Whatever it is, this wondrous magic is diminished when respectable media like the Huffington Post publish reputable writers like Pope who offer tiny personal experiences as adequate accounts of complex situations, acting like experts when all they are, are poorly guided tourists.