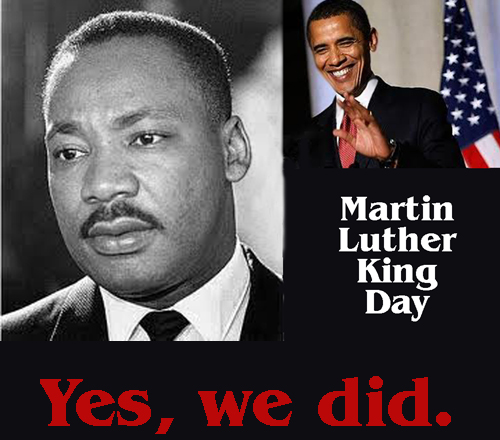 Today is an American holiday, Martin Luther King Day. I am a white man who has spent nearly half of every year of his working life in black societies. I am witness to the change that King’s type of philosophy has made in Africa and at home.

King was America’s black civil rights champion, and what I and probably most people remember of his turbulent last days was nearly unspeakable violence. My most vivid memory is as a very young journalist, penned in under a burning El Stop in downtown Chicago as the city raged following King’s assassination.

I remember gun fire as a regular sound in my low-rent apartment in Washington during the summer of the 1968. Or the unending sirens and tear gas around my apartment in Berkeley in 1969.

King is duly revered for radically changing American society with non-violence? When what I remember most is fire, bullets and ambulances?

It’s been more than 40 years since then. Trauma has a way of finding its small berth among the many more ordinary memories of earlier life. My young student years were lived in Jonesboro, Arkansas. Of the more than 1000 students in public middle and high schools when I was there, there was not a single black. Less than a decade after I graduated, I returned to Jonesboro for a wedding, and learned that almost half the town was black.

I lived in Jonesboro for 5 years. I went to school, groomed pretty dogs at a vet’s, shopped on main street, sipped sodas at the donut shop, cheered at school sports’ matches, went to church socials. I remember regularly seeing only one black, Bessie Mae, our maid.

King’s philosophy of non-violence, like Gandhi’s and to a much smaller but significant extent, Mandela’s, were not eras of no violence. There was incredible violence, and this violence, as with the sizzling El Stop that nearly fell on me, will be blazoned in our memories forever. But with time we’re able to reflect that that violence was the reaction to those heros’ methodical, unswerving actions for a freer, fairer society.

Those movements as a whole were not violent. But the reactions to them were hideously violent, and then sometimes when Watts or Chicago burned, the frustration of the oppressed boiled over. But mostly it was not that. Mostly it was unarmed hundreds of thousands of peaceful demonstrators being tear gassed and shot by police.

And why? Because it was the desperation of trying to stop the inevitable. I really believe there is more good in the world than bad. Justice will ultimately prevail.

We are a deeply rooted Chicago family. My father was sent from Chicago to Jonesboro to start a factory owned by an Illinois company to avoid the growing union movement in the north. One of the first things he did was pack up us three young kids in the car and drive us into the cotton fields west of Memphis, stopping the car, saying nothing, and making us watch black share-croppers toiling in the summer sun.

Try as I may, that and Bessie Mae, are the only blacks I remember as a teenager, living in the midst of them.

Today, my President is black. My Attorney General is black. My closest friends, many in Africa, are black. My rare return to Jonesboro encountered many blacks. Memories created of life, today, are no longer monochrome or technicolor, they are just wonderfully vivid.

Social justice does prevail. In some places, throughout Africa for example, it seems to take longer than in my more developed society, and perhaps that’s the reason. The messages get around more quickly. So in my life time, the personal sacrifices of Africans are understandably greater than here at my home.

But the sacrifices of each individual are the same. And what King taught us is that they’re effective. All you need to do is rise to the needs of your community above the needs of yourself.

I am so fortunate to have lived long enough to see King’s work transform the bad in my society to good, almost as an imperative. An imperative that I believe I now at this very moment see happening throughout so much of Africa.