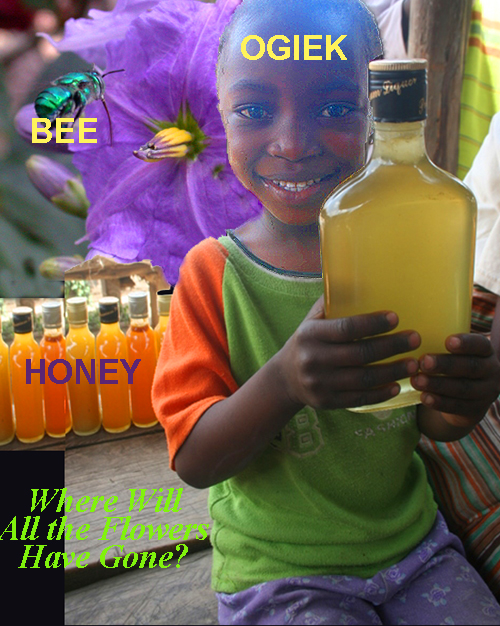 Do you sacrifice a small group of ancient people to promote a larger society? We put Indians onto reservations. Should the Kenyans evict 36,000 Ogiek from their forest?

It’s one thing for an activist to threaten you and your grandchildren with no clean water. It’s another when your kitchen faucet stops dripping.

That’s what’s happening in Kenya, today, right now. Even while giant factories are blossoming like mushrooms in my backyard after a morning drizzle. It’s happening right now as 12-lane highways are creeping across the country.

The water rationing schedule announced each week in the newspapers is as ordinary as a TV guide.

And all the needed water comes from one place: the Mau Forest. It’s the only indigenous forest in Kenya, and by our standards for instance, terribly small, only 675,000 acres, an area about the size of Rhode Island.

The Mau provides 7-10 million people with not only clean drinking water, but water for factories and cleaning. Moreover, the recent reduction of the forest has contributed to mud slides and soil erosions that has been devastating.

The Mau has sinisterly been eaten away for nearly a hundred years. British colonials recognized its rich soil and confiscated huge portions for their settlers. Independence only deepened the problem as corrupt politicians confiscated more.

The deposed dictator Daniel arap Moi may own as much as 300,000 acres of what was once Mau Forest, now tea estates.

Kenya is the world’s largest tea exporter. Take it from me, it’s the best tea in the world!

Then, during the political violence following the 2008 election, hundreds of thousands of people fled to the hills. And those hills were largely the Mau. As many as 100,000 people began to squat in the Mau.

Then came the Developed World’s haughty solutions to global warming. In Copenhagen in 2009, then Cancun in 2010, developed countries proposed not reducing their own greenhouse emissions right away, but rather a sort of Global Cap-and-Trade policy without the Cap called “REDD’’ — Reduced Emissions from Deforestation and Forest Degradation in Developing Countries.

$30 billion to the developing world by 2012, and $100 billion more by 2020. Kenya’s portion, if it ever comes: a few hundred million. But that’s sizeable to Kenya, and in order to get it, Kenya has to preserve the Mau. There’s no other forest it can “trade”.

In what is really a radical, radical move, the Kenyan government has decided to evict everyone from the Mau. All those colonial land-grabbers, some of the modern politicians with tea farms, all the displaced persons from political turbulence, buying all the previous land owners and squatters new land somewhere else, at billions and billions of shillings (that will still be less than the compensation from REDD).

And, the 36,000 Ogiek who have lived there for a number of generations.

The Ogiek are forest people. The generation before the current one was almost entirely hunter/gatherers and bee-keepers. The Ogiek were themselves displaced from arguably better forests around Kenya in the 1930s by British land grabbers. But when they moved, they took their lifeways with them.

But the Kenyan government policy is without qualification. Everyone goes. Including the Ogiek. And, their bees?

No one is wondering about the bees. Unlike temperate forests here at home, forests in Africa rely much more on pollination and cross-pollination to survive. The diversity of the forest biomass is much greater in the equatorial parts of the world like Kenya. Without a constant diversity, the forests collapse.

The diversity is dynamic to some extent, a sort of constant evolution of new species and sub-species. Quite apart from the morality of evicting the Ogiek, the longest living residents of the Mau, what about the bees?

Great video below about Ogiek and bee-keeping. Stick with the first 30 seconds which have nothing do with Ogiek or bee-keeping.