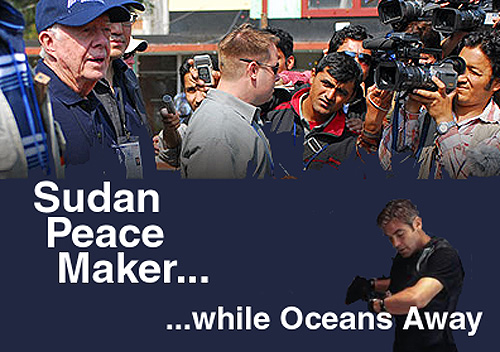 Southern Sudan has voted to split from the North in a peaceful, fair election. Minor trouble was reported in the border regions, but all the players took it in stride. It was not and never should have been considered the moments before doomsday.

We have known for 5 years this would be peaceful. George Clooney, of course, didn’t. And that’s understandable. There just wasn’t enough drama to hold his audience.

Exact and official results will be announced in about 4 weeks, as planned. But one of the most reliable sources of news from Khartoum, the Sudan Tribune, published a photo today of Mohamed Ibrahim Khalil, the north’s pivot man for the referendum, announcing to the press that the outcome was for succession.

There were dozens of foreign election observers, and every single one of them has validated the process “peaceful and credible.”

The south, which is much more open and transparent, is being polite to its soon-to-be discarded motherland, by not officially releasing the exact numbers until the north does.

But it is widely believed that over 60% of the qualifying plebiscite voted, and that nearly 70% of both the north and south will have voted for succession, perhaps as much as 95% of the voters in the south doing so.

About 50 people were killed during the week of voting, although not even these casualties in the now disputed Abyei oil-producing region can be linked directly to the referendum itself. It seems as I’ve written earlier that the dispute between two militias was actually about who would be allowed to vote in another referendum to be held in this region some time in the future.

Creating two countries out of one is not easy. “The Sudan” has been more or less in tact since 1899. The two sides have been unable to demarcate the actual border, precisely because they have been unable to apportion the rich oil reserves that exist there.

But The New York Times headline, “Roots of Bitterness in a Region Threaten Sudan’s Future” is just another over statement of the current situation, with little credit to the good reporting The Times has otherwise managed from the region. The conflict in Abyei is more akin to a gang war in Watts than a war between the U.S. and Mexico, which is how The Times and others are characterizing it.

Another problem will be the flood of new immigrants into the South, although even that has been steadily occurring for some time.

There are many more positive components of this whole process. Basically, a five-year transition has been on-going. When this peace deal was signed five years ago, separation at that point was a given.

And while Khartoum may ultimately fiddle the numbers to save what little face it can, there’s no doubt the north will validate the result. The important point here, really, is that this was predictable, as so many of us were saying again and again.

But the voices of the little people on the street mean less when the predicted outcome is good and peaceful.

Thank you, Jimmy Carter. And George, I love your movies.