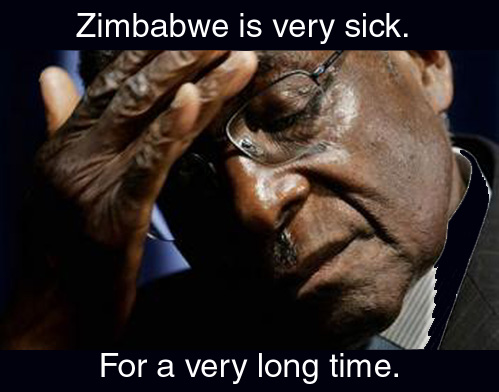 Robert Mugabe, czar of Zim, may be coming to an end. But the era of Robert Mugabe is set to last a very, very long time.

Mugabe remains in Malaysia where he returned unexpectedly following his annual vacation, for emergency prostrate surgery. He was too paranoid to have the surgery in Europe, which is nearer to Zimbabwe, or next-door South Africa where the first heart transplant was performed, certain that unfriendly doctors would kill him. He says he’s 86 years old, but most of us believe he’s 89 or 90. He has suffered from various cancers for years.

Last week, the day after Mugabe left, Zimbabwean troops were deployed across the country, swaggering and arrogant as usual, setting up camps where there weren’t hotels and ordering out without paying.

Mugabe’s illness is being well reported in the Zimbabwean Mail, the only reliable “local” media on Zimbabwe. (It’s published in London.)

Mugabe regularly takes a vacation every December/January, and this time it was to not-so-unfriendly Malaysia. He left on Saturday to return home, then abruptly switched gears and returned to Malaysia for surgery.

The Mail reported Tuesday that the surgery was fairly major removing all of the prostate. The newspaper reported Wednesday that before Mugabe left he ordered his underlings to prepare a new election.

The opposition won the last election according to the few outside observers that were allowed in, but the government overturned the numbers. After some street violence the two sides settled on a coalition government that gives the opposition a face but absolutely no power.

The government uses a voter registration roll of which a third of the names are over 120 years old or already declared dead.

Tendai Biti, one of the opposition faces in the unity government, told a hastily summoned press conference Wednesday that the election will cause a bloodbath.

Zimbabwe, which is effectively Mugabe, controls everything including whose blood will be drawn at any moment. Rest assured government thugs, militias and supporters will be just fine.

What’s become so interesting about Zimbabwe is a certain purity of evil. Unlike so many authoritarian countries in the world, Zim makes no bones about, say, a voter registration poll. It doesn’t matter to the authorities if everyone knows that people who elect them are dead.

Mugabe’s humility at sitting next to Morgan Tsvangirai, his “prime minister” in the coalition government, is astounding. Tsvangirai has a Mercedes just like Mugabe, but virtually nothing else.

Tsvangirai has been beaten nearly to death several times, has lost his wife in a suspicious car accident, has had all of his assets attached, and has virtually no power to do anything but flee the country, which he has decided not to do.

Mugabe must hate the dickens out of him, but the old man patiently sits next to Tsvangirai especially for the foreign press and listens patiently to a now well-known litany of criticisms, then Mugabe says nothing and leaves the room.

And, so, nothing changes.

An election will cause blood to flow, but it won’t pool in a bath. It’s always a one-directional fight in Zimbabwe. That’s the reason Mugabe wants another election. He wants to rev up the level of terror as he fades from the scene.

The country is, well, not really a country anymore. The joke of the Zimbabwean dollar reaching a quadtrillion mark note was finally too difficult for money printers, so it’s now the U.S. dollar and nothing else. And for this country which was once was the 8th largest economy in Africa, there are now fewer dollars in circulation and in local assets than in Raleigh, West Virginia.

Once one of Africa’s richest agricultural areas, there is not enough food produced to feed a tenth of its remaining population. Mines over rich natural resources are functioning at about a tenth of capacity. Tourism is dead. Most rational Zimbabweans left long ago.

And for many of the same reasons that China doesn’t take a proactive stand with North Korea, South Africa is quite happy to maintain the status quo. A total and complete breakdown of the country would send too many immigrants all at once into South Africa.

And don’t think that the status quo will change if Mugabe dies. There are legions who depend on Mugabe’s intricate architecture of payoffs, and the hierarchy is already in place. His likely successor is Defense Minister Emmerson Mnangagwa.

If not Mnangagwa, then Vice-President John Nkomo. If not Nkomo, then head of the army, General Constantine Chiwenga. If not Chiwenga, then secret service boss Happyson Bonyongwe. And if not Bonyongwe, then Police Commissioner Augustine Chihuri.

It’s all neatly diagramed out. And there are a thousand other names that fall further down the tree of power. And every single one of them on the toothpick highrise knows it will come tumbling down if one toothpick moves out of line. And then, there would be a real bloodbath.

But it wouldn’t bring good people to power. The good people are gone. Zim’s problem was that good, educated, decent Zimbabweans left instead of fought. It’s been easier for them over the years to slip down to South Africa, move over to Mozambique or become refugees in far flung places like .. America. All the proactive will for good in Zimbabwean has been beaten out.

Some contrarians (optimists?) believe when the stick house falls that Tsvangirai will plaster the pieces of left over government back together, the way he’s so often plastered up his own skull.

I wouldn’t bet on it.