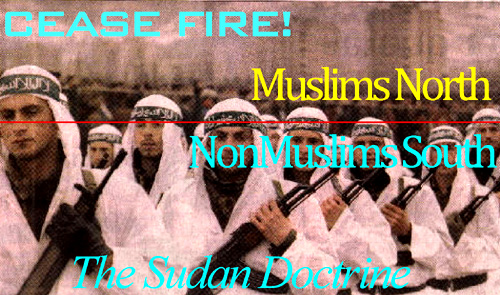 Until now many efforts towards peace in troubled parts of Saharan Africa have focused on fomenting coexistence betweenf Islam and competing religions. What the Sudanese referendum says is that coexistence of Muslim and non-Muslim ideologies won’t work.

When the election in The Sudan ends this weekend and shortly thereafter South Sudan declares itself sovereign, Muslims will be in power the north and non-Muslims in the south. But that’s not the end of it.

I expect a migration is going to begin in both directions between the two entities not so dissimilar to what happened in the Hindi/Muslim breakup of India and Pakistan (later, Bangladesh) after World War II. In fact the Sudanese migration began when it became apparent that the process was going to end in partition. More than 50,000 immigrants already turned up in the south in just the last few months.

This migration won’t be as large as the one following India and Pakistan’s partition, because there aren’t as many people to begin with. But it will be substantial enough to notice. And it will further polarize the individual societies at each end.

In America we often read about the religious competition as between Islam and Christianity, but that’s not the case. The perception comes mostly from the large presence of Christian missionaries and aid societies in The South, but the fact is that the majority of The South is not Christian, despite a half century of Christian proselyting.

Neither do I think it fair to call it “animist” as is often read as much as “Christian”. In fact, the two are often combined. I don’t think it fair-minded to say “animist” because that label carries a ton of derogatory inferences from the colonial era.

The fact is that most southern Sudanese are not religious in any regards by modern standards. They revere their family ancestry and create religious ideologies often unique to very small geopolitical areas.

Christianity is probably the largest single recognized religion in the south, but it is far from being a dominant ideology among the majority of southern Sudanese.

What it is truest to say is that the majority of southern Sudanese characterize themselves as anti-Muslim. And this characterization of oneself as anti-something, rather than something-something, is telling.

It is the basis for the conflict not only in The Sudan, but in Chad, Mali, Spanish Sahara and to a lesser extent elsewhere throughout the Saharan belt of the continent.

Religious ideology always tries to dominate government, even at home in America. Less modern societies are less capable of keeping this motivation at bay in part because emerging societies need forms of government that will be readily and quickly accepted by their people.

Muslim ideology with its male-dominated, polygamous hierarchy fits perfectly into many more traditional African societies. This week a Nairobi newspaper published a feature article on how the well-known and very traditional Maasai tribe was accepting Islam in surprising numbers.

The current president of Sudan, Omar al-Bashir, is a deft survivor of a number of court schemes and military coups, and his current long reign can be linked directly to his decision to make Islam’s Sharia law the law of Sudan in 1983. There’s no question in my mind that this is what has kept him in power since.

And quite unlike a legalistic foundation — even one as entrenched as I feel the U.S. constitution is — the opportunities for amending law in Muslim formulated societies are infinitely less. Some may argue impossible.

This draws a line in the sand, (and in the case of the Sudan, that line goes right through the oil fields). Muslim above the line. Non-Muslim below the line.

There is a huge problem in dividing up the world by religious ideology. It tends to divide not only ideas and faith, but wealth and health. But as with India and Pakistan, the motivation to minimize conflict was a vital one that has been served more or less well, even while they haven’t exactly become bosom buddies.

So if this experiment with The Sudan is successful, which I think it will be “more or less”, then a new formula may emerge for reducing Africa’s troubled conflicts.