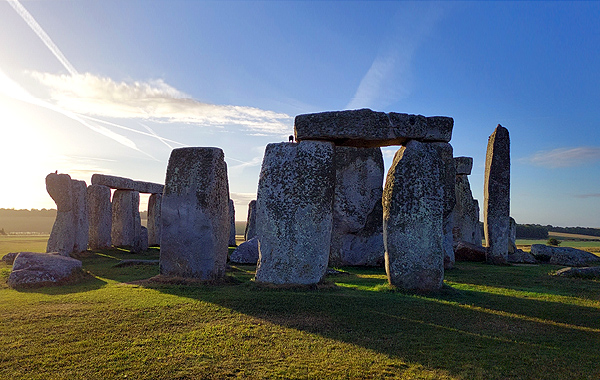 If you’ve never been to Stonehenge and Egypt, something’s missing in your understanding of either. Several thousand miles and two seas apart, both early societies moved 40-50 ton stones onto suspensions 4-5 meters high.

Egypt is grander and at least a millennium earlier but Stonehenge existed multiple millennia before the Romans conquered southern England. So what Fedex brought news of Ramses to Avebury? What possessed Neolithic man to lift stones exponentially heavier than himself so high into the sky and to so carefully place them that the solstices and lunar calendars were exactly predicted? Ever heard of a sundial?

Taking the long way to the wildflowers of Nieuwoudtville we stopped for just under a week to explore the Midlands of the UK with the Stonehenge “inner circle” our main object.

So much of Wiltshire and southern England is replete with Neolithic sites that the National Trust now exceeds the military in owning the largest portion of land. Stonehenge is just one of many stone temples, but its size and astronomical engineering is what begs the comparison with Egypt.

So what posessed early man to raise a stone to levels that made it look to early man like it was not accomplished by early man?

I think the speed at which human culture accelerated after the discovery of agricultural around 7-8000 years ago provoked an introspection lacking beforehand. Even the most primitive forms of agricultural beyond individual gardening require complex planning and community involvement, even if limited strictly to the market that distributes the husbandry.

This conversion of the hunter-gatherer to farmer was a conversion of a lonely soul to a social community. If you think emailing or microwaving or space flight inspires awe, imagine the multi-generational retrospective of leaving the forests running down animals to growing corn in a field.

It’s when culture overtakes natural selection as the guarantor of the human race. And I can’t but imagine that over the course of only a few generations Neolithic Man began experiencing life in an existential as opposed to reflexive way.

Just like today it could have produced hot heads and egomaniacs whose greatest aspiration was apocalypse and greatest observation was a fantasy, as easily as mindful spiritualists humbled by a sense of insignificance.

Those would be the people that organized communities and created technology, logarithmically accelerating human development. And with each new idea and tiny discovery came a fear of touching something beyond themselves.

So in the beginning they raised up mammoth stones to document the point in human history when man as the individual was succeeded by the human race.

Many argue that since Egypt was grander and earlier than northern Europe that the magnitude of difference correlates with the time it took for Egyptian technology to travel several thousand miles across two seas before Dreamliners. I disagree.

No, I’d like to think that these monumental efforts of Neolithic Man were parallel mime evolutions.

Both breath-taking human accomplishments started and were finished long before the Bronze Age, which I think is probably the first era of real human engineering exchanges.

The advent of introspective man over simple sentient man demanded creations representative of the birth of human society.

Of course it was and continues to be considered an expression of religious awareness, but I think that’s a copout. It’s far more complex and mystical than any organized religion which was but a better attempt at the time to explain to contemporaries what was happening to them.

The independent thinkers, the Druids and mystics that became the Carl Sagans and Jean-Paul Sartres, were and are the ones who can best explain to us the awesome nature of human accomplishment and strike the border of defining what we can know. In fact it was the anthropologist/philosopher Leslie White who first revealed to us the way to understand our mystery was to “not know.”

That is the gentle wonder of sensing ourselves, by trying to represent something so much greater than what we know we are.

It’s all in the simple presumption that Neolithic Men, more or less simultaneously in the fecund lands of the Nile and the cold blizzards of the Avon raised 40-ton stones 20 feet high into the sky. Unconnected to one another they celebrated the human force that they shared across an unknown universe.

Separate from biology, unimpeded by the natural world, the human force is our greatest motive and certain sustenance, forever first demonstrated when our ancient ancestor raised a rock bigger than himself beyond his touch.