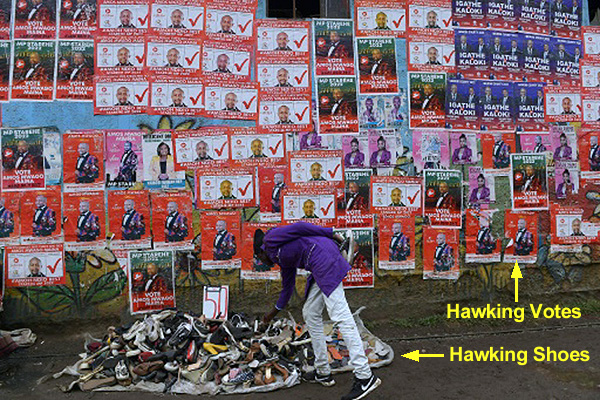 I hear a giant ho-hum following the grunt-grunt of the lion walking through the night.

Two days after the election with 10% of the polling stations still outstanding the two rivals for the Kenyan presidency are divided by less than 1 percent. It will be days before we know who is President. Maybe weeks as it gets hung up in the courts. Kenya is as tense as a cocked mousetrap.

But right now the country is peaceful. Young people didn’t vote. Parts of the country – particularly heavily populated parts near the coast – hardly turned out at all. The slums which account for more than half of the greater Nairobi population and which were instrumental in past elections’ violence, are quiet tonight.

What I want to know is why elections are so close, today.

At home in America we claim it’s because the country was politically fossilized by terror from the Right when they realized that they were in decline.

Europeans argue generationally: The old like the stability of the past and the new are fearful of an apocalyptic outcome. In parts of Asia like the Philippines they argue that corruption is insolvable so take the devil you know.

In Kenya there’s no similar explanation. The two candidates represent tribes that were historical enemies and there’s no question that still matters, but from a policy perspective there’s no difference at all. Or from an ethics standard or character standard or whatever. In fact the greatest difference is that one is slightly older than the other.

So what does that tell you about agricultural policy or social security?

Well, actually, we can mine something valuable out of this humdrum. All these elections are close because the votes cast have nothing to do with determining policy.

Yes, I as a progressive argue that Democrats have a proactive social agenda and want to combat climate change, and my rightest opponents argue that Republicans alone protect individual liberty.

Each position is substantive but now contrast them. Neither has much to do with the other. Neither position offers an entre to discussion about the other.

So basically there’s no debate about social agendas or climate change or individual liberties… agricultural policy or social security. Everybody just espouses their favorite topic then retreats to the corners based on their tribal affiliations.

It doesn’t matter why you support whomever.

Given the dearth of substance, pure statistics devolves a 50-50 division of everything.

It’s enough to make you a communist.