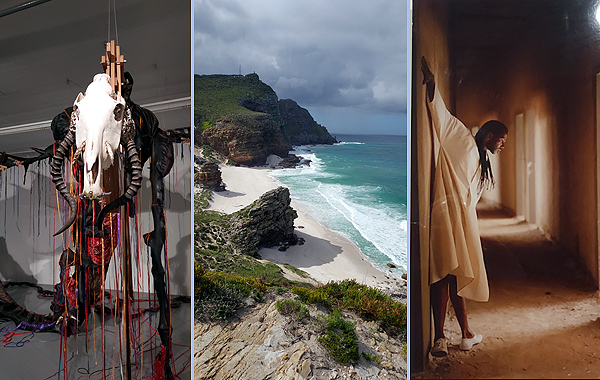 South Africa is exquisitely beautiful and culturally devastatingly complex. It’s the bitter-sweet but intense experience I try to convey at the start of a South African trip.

My job was made really easy this time. The whole massive conundrum is so perfectly conveyed by Cape Town’s new super modern art museum, anchored at the moment by Rose Tracey’s “Shooting Down Babylon” exhibition.

On the one hand we walked across the top of the Cape of Good Hope able to see for miles and miles out to see and watch all the anger boiled by the seven seas crash against giant mountains. And on the other hand the vast majority of South Africans remain captured in an asphyxiating ugly past that Tracey characterizes as “Mandela’s Dream Deferred.”

Cape Town is a slick and busy modern city, where the country’s modern history began, and where every attraction you can imagine is at your doorstep.

We started at the statue of the four Nobel Peace Prize Winners and I’m able to tell personal stories about three of them: Nelson Mandela, Desmond Tutu and F.W. de Klerk. That quick first stop alone is enough to convey the complexities of South Africa: Deep religion vs. no religion, apartheid vs one-man, one-vote; and of course, black vs. white.

I then took everyone down the Company’s Garden which is a walking history of nearly four centuries. The original irrigation ditches from 1643 still function running past the parks which on Sundays in the 1800s displayed side-by-side lions, tigers and slaves. The modern Parliament which created one of the most progressive constitutions on earth is adjacent the Slave Lodge where humans were auctioned like sheep skins.

Standing in the middle is the striking bronze statue of the controversial Cecil Rhodes, freer of slaves, uniter of the empire, deceptive if immoral diplomat, filthy rich king of de Boers, one of the few Englishman voted into power by Afrikaans, avowed atheist and gay, and the man who laid down more railway tracks per day than any man before or since.

Then we sampled Cape Malay cuisine. Nazli’s BoKaap Kombuis restaurant has been in her family for 5 generations! We then listened with disbelief as Noor described the relocation of his family of 7 generations and another 65,000 District Six residents during apartheid.

Noor, an animated little grandfather with piercing eyes and rapid gesticulations has written the best-selling book on District Six. His narrative was spell-binding and brought more than a few of us to tears.

Today we covered The Cape of Good Hope. The weather was cold and beautiful. The rains have been good and the wildflowers spectacular! Even some protea are now blooming. Thousands of pelagic cormorants were nesting and almost all of us hiked the dramatic trail from the Cape of Good Hope sign to the funicular.

We ended today with the glorious story of Boulders Penguins. The work of residents and Sanparks took two endangered breeding pairs in the early 1980s and turned it into today’s colony of 2200!

Tomorrow a famous old docent at Kirstenbosch Botanical Gardens takes us through this spectacular world-class garden lacing the bottom of Table Mountain. We’ll then sample our first wine from South Africa’s first winery (1643) before ending the first part of our trip and prepare to head into the interior!