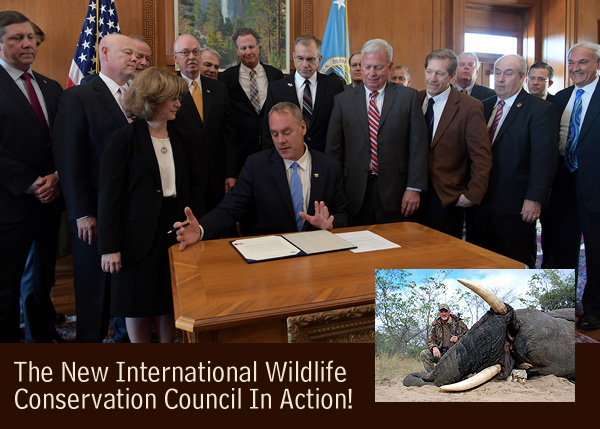 Here’s the thing: we should all be upset with USFW’s reversing a ban on importing elephant tusks, but it’s not quite the story you think. As described below I could see a Hillary administration doing the same thing.

What Ryan Zinke did (please let’s stop pinning everything on the moron Donald Trump who doesn’t even know the difference between African and Indian elephants) will definitely set back wildlife conservation in Africa, but in the panoply of so many other anti-conservation actions in the last few years, it’s minor. It’s the panoply which is major, which makes every minor move that much worse.

You need to focus on the facts. Stick with me.

US Fish & Wildlife (USFW) under the direct authority of the Interior Secretary, Ryan Zinke, rescinded an Obama era ban of elephant tusk hunting trophies from Zimbabwe and Zambia being brought back into the States. The most prized elephant hunts continue to be done in Tanzania, and hunters have never been banned from bringing back their tusks from there.

The Obama-era order was an incremental action that followed an embarrassing move by Obama himself that waived a CITES treaty prohibition against rhino hunting in Namibia for an important Republican donor in Wisconsin.

The order also came in the midst of the public outrage with Cecil’s killing.

The Obama ban was justified by a USFW finding that Zimbabwe and Zambia do not correctly report their hunting data. (Presumably the other countries like Tanzania do?)

Hm. I don’t think any African country has ever correctly reported their hunting data. They didn’t do so before Obama, or during Obama or after Obama. And they won’t now or ever.

So folks, this has been a political football for some time. And in the large scheme of changes in power and regulations, it would normally be minor if it hadn’t been announced the way it was in Tanzania with great fanfare in conjunction America’s biggest hunting organization which itself marked the establishment of the bogus “International Wildlife Consultation Council” whose nearly expressed purpose is to remove more hunting restrictions, including on lions.

PS: The “America’s biggest hunting organization” is Safari Club International, which by the way, recently replaced the world’s most respected lion researcher in the Serengeti as the Tanzanian government’s principal conservation NGO there.

There are so many weeds it’s hard to know where to lay the Roundup.

This act itself is near meaningless. If Hillary were president, I can imagine a situation where we could entice an obstinate former official to leave the Zimbabwe government so that the new regime emerging comes in with better health. That carrot might be letting some old codger get control of some hunting blocks where rich American hunters could once again harvest elephant tusks and bring them home.

It would not be without protest, of course, but not like now. The “Trump Administration” is under siege from women, the disabled, conservationists, the sick, scientists, the poor, teachers, the helpless – the vast vast majority of us. Now add elephant lovers and they’re extremely passionate. Their reaction is just, but much louder than it would have been were there an iota of morality in Washington.

There aren’t very many in Donald Trump’s base who can afford a $50-100,000 elephant hunt. His sons can. His secretaries of numerous cabinet posts including Ryan Zinke can. When they dare to look into their souls they see darkness. But today there’s light and they’re going to have as much fun as they can before someone shuts the window.

And the base cheers and cheers.