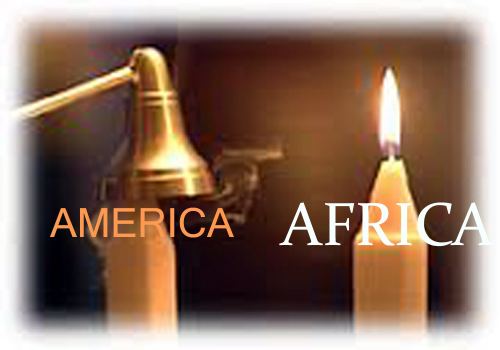 As I listened to President Obama last night, I thought of the State of Africa, and I realized that real hope for future justice in the world is squarely with Africa, today, not America.

Many will consider me foolish: yesterday was a day of tear gas, rioting and general upheaval in much of north Africa. But what I see are people uprising, renewed and respirited. And what I heard last night was Obama snuffing out new spirits in America.

Africa has been in the throes of radical change ever since apartheid in South Africa fell almost 20 years ago. Economic catastrophe today is the motivation that carries the spirit of liberty from South Africa to Tunisia. There’s nothing odd about that.

Economic catastrophe has always been a reason for political change throughout the history of civilized society, and so it should be, since it is often caused by the older society unable to adjust to newer social realities.

In Africa this has led to radical changes in the political organizations in South Africa, Kenya, Liberia, Senegal, Madagascar, Sudan, Cote d’Ivoire and the Comoros. I’m not suggesting that the direction of this change is yet fully understood or right now universally good. But it is all fueled by people power. And that all by itself, is good.

Respirited mass movements lead to real recalibration of society. Former winners become losers and former losers become winners. The cocktail party phrase that social change can be a win-win situation is premature. There is too much injustice and prejudice in the world still for that to yet be fully possible.

But it doesn’t mean that the new losers are relegated to the same misery that the former losers might have suffered. In Africa, in fact, it means that the powerful just become a little less powerful. Kenya’s former dictator, Daniel arap Moi, enjoys a wonderful retirement, safe and comfy and in fact respected by a wide section of Kenyan society.

But his ouster by the people of Kenya led to a series of events that has heralded in a new populist who is likely to radically alter the Kenyan economy currently defined by legions of poor. No single movement or leader is capable of changing the science of economics. But Raila Odinga is likely to elevate the condition of Kenya’s poor in the next decade far beyond what I could have imagined, and no doubt at the expense of the rich and powerful.

This is precisely what happened and continues to happen in South Africa. It began a generation ago, as the richest and most powerful emigrated to the tune of 1800 per month starting in the 1980s, as they realized their lofty positions could not be sustained in a modern African society.

Throughout Africa, populist movements are ushering in more just and equitable societies.

In America, Obama was that symbol as well in 2008. But he failed. He is far behind his times.

That may be our fault, not his, but he was complicit. He accepted the mantle of change. He now revels in the temerity of those who condescend to answer a robo phone poll. But he seems too steeped in the past to be pried from his 19th century politics, constrained by dead heroes like Abraham Lincoln, so great for their times but as outdated today as a buggy wagon.

I look at Africa, and my heart beats fast and hopefully. I listen to Obama and grow depressed.