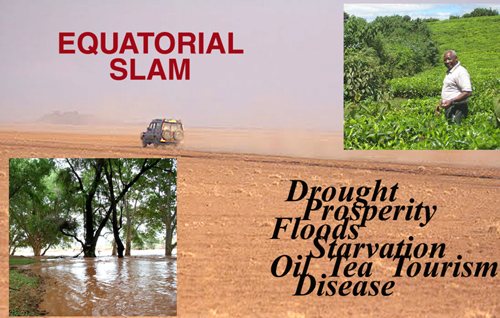 We are just beginning to understand how severe global warming impacts the equatorial regions like East Africa. We know that Vanuatu may flood away, but we now suspect that important parts of East Africa will both blow and flood away, too.

Short rains in specifically defined areas of East Africa failed the end of last year. For those areas, which include large parts of Laikipia (Samburu) and Kajiado (east of Amboseli, parts of Tsavo), crops have failed and hoofed stock losses are projected at more than 20%.

This follows last year’s record floods, which followed a three-year minidrought during which 80% of pastorliasts’ hoofed stock was lost.

Meteorologists are beginning to see a pattern in this jumble of devastating weather. Radical and extreme weather is likely now the “norm” across the equatorial regions of the world, including East Africa.

Much of East Africa is booming economically, especially Kenya, and a large component of this growth is agriculture. Yesterday, Kenya’s Tea Board reported record earnings of nearly $1.3 billion in 2009. This moved tea production above cut flower production ($995 million) and tourism ($850 million).

But unfortunately for Kenya and distinct from its neighbor Tanzania, its agricultural zone is especially vulnerable to global warming. The equator runs right through Kenya, about 40 miles due north of Nairobi. This invisible line seems to be the marker for catastrophe from global warming.

For most of my life, we expected a serious drought in East Africa about every ten years, and when it came, it was widespread and devastating. I remember a drought in the eighties when safaris were hard pressed to find anything but dying cats. An all-day game drive in the crater resulted in one dying hyaena.

Wild animals are particularly resilient, and we know now much better than we knew then that animals know where to go to survive in serious droughts. And men, too, are resilient. A single horrible blow every ten years was expected and unsurprising.

What is happening now is altogether different. Think of the equatorial regions like a blue, red and green quilt. The red areas get drought again and again, sometimes harder than other times but multiple times. The blue areas get hit less far less than the red areas, but often enough, but are then followed by extreme floods. And the remaining green areas are basically wetter than they’ve been in the past.

As you would expect the red drought areas are semi-arid, and these are the areas of the hoofed stock, the pastoralists like the Maasai. Multiple droughts as is happening now is destroying the resilience these people have evinced for milennia. It’s one thing to weather disaster once every ten years. Every 2 or 3 years means whatever seeds were laid by the last grass have completely blown away, along with whatever top soil was left.

But the greatest surprise is that in areas that were normally even more arid than Maasailand, floods are now a regular occurrence. Turkana, far north of Samburu, accustomed to 1 or 2″ of rain annually received nearly 30″ of rain last year. Everything pooled and melted, and now in the throes of a drought, there is little left up there but dust.

Everything is happening so fast, it’s very hard to predict how East African society will adjust to these extremes. Except one thing seems more and more clear: the lifestyle of the pastoralist is doomed.

At least a year’s warning is often possible. The opposing phenomena of El Nino, inevitably followed by La Nina, can predict what is going to happen.

The El Nino phenomenon occurred about once every decade in the past. La Nina never occurred. Now, El Nino comes four or five times a decade, always followed by La Nina.

If this becomes a pattern, agricultural production, pastoral life styles and wilderness areas like big game parks, will be rattled to the core.

Another large component of East Africa’s explosive growth is Chinese investment, mostly in infrastructure to develop natural resources like oil. Which is used for factories and automobiles. Which produces more greenhouse gases. Which causes more global warming, more and longer El Ninos and more La Ninas.

This is all happening so quickly in the context of developing economies, that it seems completely unstoppable, even though we possess the science to stop it. The tipping points have been endlessly discussed in the developed world: Cap-and-trade, green technology, electric cars.

But to a Maasai herder surviving day-to-day, or a land owner with oil in the ground in Kenya and three kids who want to go to an expensive university, these are not compelling topics.

The question is, will the land flood away or blow away before enough cash can be acquired to compensate for its loss?

I heistate to underestimate the remarkable resources of the young East Africa, but this challenge looks pretty grim.