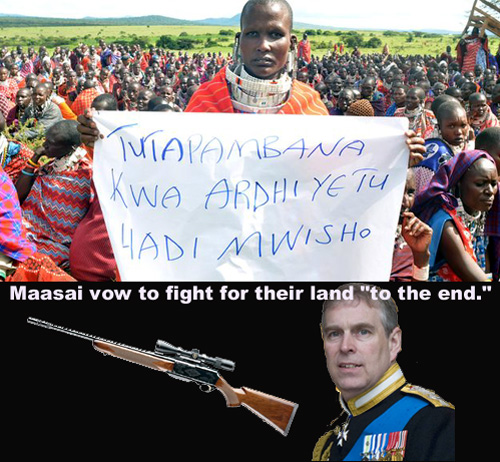 A major fight if not an actual civil war is about to erupt in northern Tanzania, as Maasai prepare to battle government authorities in Loliondo, according to a BBC report this morning.

The dispute is over a Tanzania government decision to evict 30,000 Maasai from traditional grazing lands near the Serengeti National Park so that the area can be leased to a Dubai Hunting Company.

The story was first reported globally by the Christian Science Monitor earlier this month and went viral, mobilizing Maasai throughout the area.

The company, the Ortello Business Corporation (OBC), is a gigantic, jet-setter hunting company that has set up a mini city in northern Tanzania each mid-year for the last 20, for high profile hunting clients including Prince Andrew and most of the royal families of the Emirates and Jordan.

When I move near the area while still in the Serengeti National Park, my Tanzania cell phone beeps then displays the message, “Welcome to the Emirates.” They even bring cell towers.

The Arab operators of the area get free, undisputed access into and out of Tanzania. They have built a private airstrip on which modified 747s land direct from Dubai. Private security disallows anyone – including Tanzanian officials – from crossing their perimeter.

Until now, the under-the-table operation which has undoubtedly made many Tanzanian politicians very rich, has been slow to gain public attention. The Maasai have been battling the operation for years, although until now it’s been seen as the classic hunting/non-hunting battle over wilderness lands.

That changed dramatically when the government announced last year that it was adding about 580 sq. miles to an area still not fully surveyed but presumed to be around the same size. The doubling of the area is particularly aggravating to conservationists, because it would be a closed portal between the hunting area directly into the protected Serengeti National Park.

But more importantly to the Maasai, it means up to 30,000 will be evicted. Some claim as many as 48,000. The evictions more than 20 years ago that first set up the hunting block did not provoke a Maasai outcry.

That was probably because the Maasai were not as educated, not linked into social media and were at the time in their own battles with other Maasai just across the border in Kenya in internecine land disputes.

Until this incident, the controversy was confined mostly to photography safari tourists accidentally entering the Arab-held lands. Tourists at the prestigious &Beyond Klein’s Camp, for instance, would occasionally come across shot animals.

Community Based Tourism companies, including Dorobo, Hoopoe and Kibo Safaris that attempted to establish ventures with the Maasai often ran afoul of the Arabs.

But today it’s quite different. “There is no government in the world that can just let an area so important to conservation to be wasted away by overgrazing,” Khamis Kagasheki, the Minister of Tourism told the press last month.

The public nature of the government’s battle with activist Maasai is new. It seems to me they think they’ll win, either in the arena of public opinion, or against the Maasai spears.

The government is still reeling from the defeat to build the Serengeti Highway.

The characterization of the government action as enhancing conservation by protecting land that is currently being misused (over grazed) I see an indication the government feels that hunting is no longer as anathema to the public as it was just a while ago.

The activist NGO, avaaz, is promoting a world-wide petition with 2 million signatures to convince President Kikwete to nullify the decision. But based on public ministerial statements over the last month, the government will not be moved this time.

Maasai evictions from wilderness lands are not new. Likely the reason for the greatest spectacle on earth, the Great Wildebeest Migration, is that nearly 20,000 Maasai were evicted from the Moru Kopjes in 1972 that is now an essential wildebeest corridor within the Serengeti National Park.

I personally had a very educated and articulate Maasai friend killed in a battle with Tanzanian rangers two decades ago. So battle with the Maasai is not new, either.

But there’s something much different this time. Perhaps global awareness, perhaps the power of the social media – I’m not sure. But I am sure that if the government persists…

..the Maasai will fight.