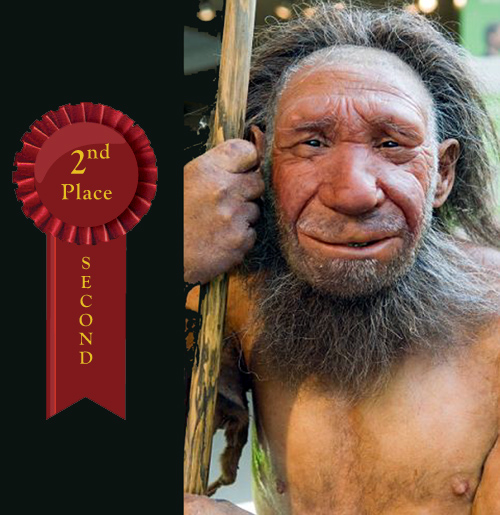 Is a successful evolutionary adaptation to become subsumed by a more successful species? A famous anthropologist will suggest as much in his new book due out this fall.

University of Wisconsin professors John Hawks and Zach Throckmorton
will soon publish the definitive conclusions of the hectic paleontological research on Neanderthals that has consumed the last decade.

The science is not disputed. It’s derived from a bounty of Neanderthal fossils, but more importantly from the DNA which led to a complete Neanderthal genome last year.

More than 80% of the world’s population outside sub-Saharan Africa have a genetic makeup that is about 3% Neanderthal. Why not sub-Saharan people, too? Because that’s where the dominant hominin species originated from, which ultimately subsumed the only other hominin species extant, the Neanderthal, to become the last surviving human species on earth.

That wealth of scientific evidence led to all sorts of exciting discoveries, but none as exciting as trying to finally conclude what happened to these big guys.

Their brains were larger than ours, and there’s some dispute that the brain/body weight ratio wasn’t much different. But clearly they were highly successful creatures who mastered the challenging climate of northern Europe, probably better than those who conquered them: us.

I use the term “conquered” loosely. While there was a time that we thought one might be eating the other, so to speak, the general consensus today is that interbreeding, and not organized clan fighting, did them in.

The question, of course, is why did the interbreeding subsume them, instead of them subsuming us? Why were we the more successful creature?

But wait, wait! Hawks implies the inverse: he suggests that the Neanderthal was successful from a natural selection point of view, because natural selection preserved his best traits in us: the 3% of our genetic makeup that is all that’s left of these poor sops:

“I love that because it makes the Neandertals into the evolutionary success story they really were. They succeeded by becoming part of us,” Hawks paraphrases in his blog.

Is this just a word game? I think so. Hawks is a superb scientist and fabulous story teller, and I can’t wait to read the book. But this is mostly PR and a bit of a philological twist-up.

Neanderthal were subsumed by homo sapiens sapiens – and not the reverse – because we are the more successful organism. Now in the long history of early hominins Neanderthal ranks pretty much at the top, but in the contest between us and him, he lost.

That’s not evolutionary success despite the implications in Hawks’ statement. And I don’t think it’s arguable that those of us with 3% Neanderthal genes are hybrids. That’s not enough divergence to be a hybrid. It might be just enough for me to become this nit-picking, ornery and untrained bully about science. But it just doesn’t rank hybrid.

So watch for Hawks’ book, it should be fabulous. But let’s keep him more scientific even if it does mean less entertaining.