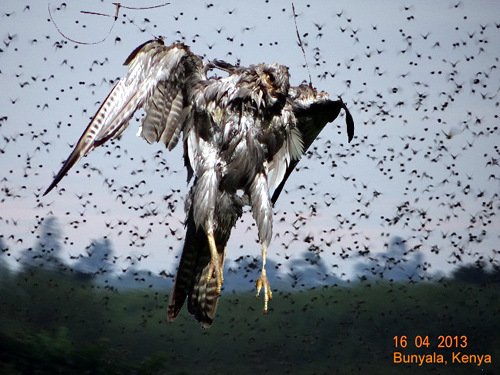 The great rice fields of western Kenya are ready for harvest. But the battle that will determine who eats the rice is only now playing out. It’s man versus bird, and the rules of engagement are not pretty.

This is such a perfect example of the folly of man trying to tinker with nature. I’ve seen it play out time and again in America mostly by campaigns against “invasive species” which have essentially proved laughably unsuccessful.

But a time comes when human society gets itself properly organized and funded, to do such things as eradicating malaria, and then the consequences are considerable:

The eradication of malaria, typhus and other mosquito vector human diseases was successfully accomplished in America by the end of World War II through the use of DDT. The ramifications of that continue.

We all know about the near extinction of the bald eagle, and how DDT so weakened the outer shells of bird eggs that many species were threatened. But the effect on the environment was much greater than just an effect on avifauna. Scientists continue to argue, today, that DDT is a carcinogen that effects a wide range of species, and will do so for centuries.

But it did succeed in accomplishing its mission. Although there’s some concern malaria could reappear in America, today, because of global warming, certainly we can conclude that America has been essentially malaria-free since the 1950s.

So it is a cost-benefit argument. Today, most African governments argue that DDT should be allowed greater use than current world treaties allow. Today the use of DDT in Africa “within confined buildings” is allowed, but the widespread spraying that effectively ended malaria in the U.S. outdoors is prohibited.

This weekend a conservation organization working in western Kenya reported that the raptors it works to protect were being poached then preserved as scarecrows in order to protect rice fields from a pestilent bird, the quelea.

The small, sparrow-like creature lives in enormous flocks. On my last safari about a month ago we encountered them just as they began to nest in Tarangire National Park. It’s as thrilling a sight as spotting a leopard in a tree.

The “mumuration“ of quelea is not unique. Many birds do this, though most simply as a precursor to mass migration. The quelea does it … to eat.

The dark clouds of quelea descend on farmer’s fields more powerfully than locusts, and a 10-acre rice field can be laid bare in an hour.

Consistent with nature’s laws, as more and more farms in Africa concentrate grain production like rice and wheat, and as the equatorial regions of Africa get wetter with global warming and these fields grow larger…

…so do the flocks of quelea.

Farmers in western Kenya have found a deterrent they like. Poach a raptor that eats quelea, and hang it in the field preserved.

A live raptor makes a kill and is satisfied for a whole day. Its effect on mumuration is short. A scarecrow raptor – at least so far – produces a longer effect.

Of course there’s no reason not to believe the quelea will pretty quickly learn how they’ve been tricked. But for the time being, it seems to work.

And so … raptors are now threatened. And the easiest way to kill a raptor today in western Kenya is with the easily obtained, relatively inexpensive and terrifying pesticide, Furadan. I’ve written about this scourge in western Kenya, before.

It’s particularly aggravating because the drug is American made and marketed, but banned here in the U.S. That’s a global disconnect I feel verges on racism.

Because we’re using Kenya as an experiment, again. Just as we do for human medical drugs. As if this is a dispensable part of god’s kingdom.

My greater point, though, is that it won’t work. Nature can’t be bullied. We can’t tinker with nature, whether it’s trying to remove garlic mustard from prairies or kudzu from highways or curing bees of a virus or massacring deer to end CWD.

It doesn’t work. It never has.

We must learn in this world to accommodate nature not try to control it. I don’t for a minute suggest we shouldn’t battle locusts over millet fields in Senegal or quelea over rice fields in Bunyala.

But the battle must be with nature’s own. An organic battle, if you will. Or at the very least a much more highly regulated pesticide industry: Pesticide use today is out of control and dangerous to humankind. Furadan is devil’s brew.

And Bunyala is no less important than Iowa.