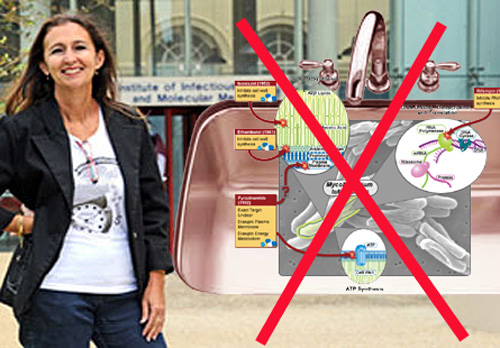 Today’s developing world health crisis is not malaria, or HIV, or infant mortality… it’s tuberculosis. And a University of Cape Town scientist knows what to do about it.

Tuberculosis is an infectious disease that most Americans associate with the pre-World War era. It attacks the lungs, essentially disrupting the normal physiology that keeps the lungs clean and clear of too much fluid.

Prior to the discovery of antibiotics the famous “TB Asylum” was the only way to manage the disease, which was basically to quarantine victims from the main population and put them on forced bed rest, in the hopes the body could fight off the bacterium itself.

Antibiotics proved completely effective in treating TB, and only in poorer or remote areas where treatment was difficult was the disease still found.

But the double wallop of the emergence of HIV and the diminishing efficacy of overused antibiotics allowed TB to reappear. What’s important to realize is that TB is a developed world’s disease. It was brought to Africa by the developed world.

TB increased in America in the early 1990s, because that was the height of our HIV infection. As soon as a handle on managing HIV was mastered by the end of the 1990s, TB in America dropped noticeably.

But in Africa the increase continues, despite a similar drop in HIV infections as in America. In fact in sub-Saharan Africa TB is now considered a greater threat than HIV.

There’s a number of reasons for this. The foremost is that TB is a relatively “new” disease in Africa with relatively “old” treatments available. The link with HIV is much more substantial in Africa than elsewhere. And the appearance of the disease was so sudden and so large that the disease seems to be getting the better of newer drugs to treat it.

Our CDC refers to “throwing the kitchen sink” at the disease as a recommended therapy. Basically this means treating the patient with a variety of drugs in the hopes of overwhelming the growing resistance of the disease to numerous antibiotics.

In Africa that’s often too expensive and too impractical for many of Africa’s very rural and poorly developed areas.

South African scientist Valerie Mizrahi from the University of Cape Town’s Institute of Infectious Disease and Molecular Medicine understands the complexity of the problem better than any person.

Taking a holistic approach to treating the disease on the continent, Dr. Mizrahi realizes that education about the disease to enhance prevention may for Africa be its single-most important therapy, and that training local doctors and scientists who have a vested interest in their communities is a close second.

To be sure, her scientific research on the microorganisms and medicines involved with TB is stellar, too. But her holistic approach was today recognized with a $6 million prize from one of the world’s foremost scientific laboratories, the Institute de France in Paris.

“For me, the most gratifying part of it is that the award committee recognized my commitment to, and passion for, developing people,” Mizrahi said.

So many problems effecting Africa as the younger sibling in a global family require truly holistic approaches, in a way that the developed world just can’t seem to understand with its bulging arsenal of technology and funding.

There are few kitchen sinks in Africa to throw at anything.

So TB is likely going to be around Africa for a very long time: like malaria, until the elusive vaccine is discovered. And managing rather than curing the epidemic is the key to successful public health in Africa, and Mizrahi is leading the charge.