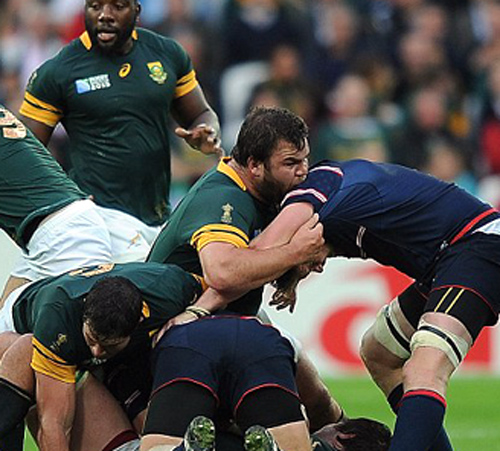 What has fewer points than a South African samoosa?

For the record, a South African samoosa has three points.

Answer: The U.S. Rugby team in its match with South Africa. Lost 64-0.

Yesterday’s qualifying match for the Rugby World Cup followed America’s loss to Samoa. Not getting any points in a World Cup qualifying match is something normally left to the Maldives and East Timor. Should America even be playing rugby?

Rugby is South Africa’s soul game. They have always been so much better than most of the rest of the world.

I remember a number of years ago when Kathleen and I were taking our children on a “Garden Route” trip east of Cape Town. I didn’t know that weekend the South Africans were playing the New Zealanders in rugby.

Instead, I presumed the end of the world was beginning. We were the only car on several different highways. There was no one at a gas station to pay for fuel. When with trepidation we arrived our hotel in Outdshoorn, the doors were open to reception, but there was no one to be seen.

Everyone was plastered in some room to a TV.

When commenting on the pitiful U.S. team’s performance, South Africans were polite about the trouncing they gave the U.S.

“Finance cannot be attracted away from the big American sports,” one of South Africa’s leading sports commentators, Mike Greenaway, explains to his puzzled South African readership.

Isn’t the U.S. first in everything? Especially when brute force is a critical component? Greenaway points out that the U.S. Eagles Rugby team isn’t really a team at all, composed of part-timers, most of whom are foreigners living in the United States:

“Samoans, Tongans, Englishmen, Irishmen and a South African by the name of Kruger. Niku Kruger went to Pretoria Boys’ High and is the son of Afrikaans actor Ben Kruger, who is still performing in South Africa.”

So really, who cares? Would you believe that the Wall Street Journal cares?

“… it takes about four seconds of watching rugby to grow tantalized with the possibilities, to realize this game is right in the U.S. wheelhouse. It requires speed and strength and creativity and a love of watching massive bodies bang into each other at high speeds.”

Massive bodies banging into each other at high speeds is actually how I view rugby. True, there are many serious injuries in American football, but I think American football is a much better expression of team strength and physical prowess.

The Brain Injury Law Center reports that the incidence of a head injury is four times greater in rugby than in American football.

The NFL played a game in London Sunday and about three-quarters of the stadium was filled. This is the fourth year since the NFL began trying to develop interest in the sport in Europe, and … well, it’s not going too well.

Rugby still reigns supreme as the attack dog sport in the UK as it is in South Africa. Unlike South Africa which would rather prostrate itself before the World Court for past apartheid crimes than submit itself to scrutiny of the health of rugby playing, the UK is beginning to recognize the beastliness of rugby:

“In rugby it is spinal injuries from scrums that are the most dangerous (110 rugby players in Britain have been paralysed by playing the game),” London’s Guardian newspaper reports.

I don’t like boxing, either. I rather think Nascar hedonistic sado-masochism. Actually, a lot of sports that tear children away from childhood to produce the world’s best tennis players and ice skater twirlers … well, that seems rather bad, too.

So that leaves football as a moral sport of supreme power choreographed with some of the most beautiful and precise moves the human body can achieve.

So come on you beasty Boks, I’d like to see you take on my Packers!