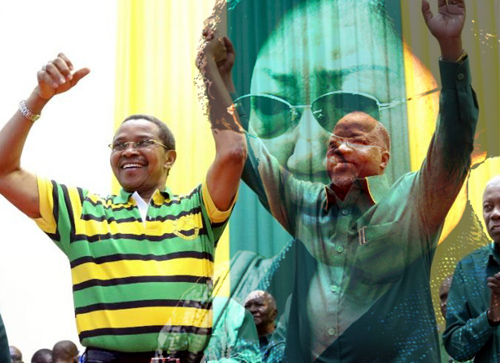 Her arrest is proof that the ruling party in power in Tanzania fears losing the national elections in two weeks. Probably even worse is the naivete of conservation organization’s glee at her capture:

Yesterday conservation groups went ape over the arrest of Yang Feng Glan, the 67-year old vice president of the Tanzania China-Africa business council, a resident of Tanzania since the mid 1970s.

The Elephant Action League calls her the ‘Queen of Ivory:’

“She has been trafficking ivory since at least 2006, working with the most high-ranking poachers in the country and in the region.”

Glan is not new to Tanzanians and clearly her crimes have been known for some time. Remarkable, isn’t it, that the police superintendent announced yesterday that she’s confessed to everything.

This means that she won’t be presenting a defense. There will not be lawyers to assist her in allocating the blame. She won’t be “naming names.”

It was all her fault, all 30,000 elephants or so, all hundreds of thousands of tons of ivory, all immigration and customs passes … she did it all herself, and she’s confessed.

No need to question any officials now who might have approved such important matters as unmarked cargo bins, or police who never checked those giant warehouses down by the dock, or those wildlife officials who left butchered elephants lying in the veld to be investigated not by forensic detectives but striped hyaenas. They’re all off the hook, now. Fang confessed and so the issue of elephant poaching and the illegal ivory trade…

And I’ll bet my bottom dollar that Mrs. Fang won’t be sentenced for her confessed crimes before the elections are over, and that the complexity of the deals over her “confession” will haunt politicians on all sides for years to come.

These idiot politicians are making deals with the devil, and I can’t wait to see how it pans out. For the time being, of course, all they can see are the ballot boxes on October 25.

That’s what I think is the key to all of this. The party in power is in trouble for the first time since independence. One of the greatest bastions of support for the opposition is in the country’s north where elephant populations are safe and well protected, where tourism is so important.

It received wide publicity and finally elevated conservation and the elephant problem into the national consciousness.

“I need conservation and the future of tourism to be part of election issues,” said the Director of the Serengeti Preservation Foundation (SPF), Meyasi Mollel.

“Conservation is a key issue in Tanzania, because the country’s economy is entirely based on natural resources. So for political parties to ignore conservation is a grave mistake,” Adam Ihucha, a brave journalist for the East African, said while keynoting the conference.

Note that the ruling party recently banned then unbanned his publication.

So in the last month as the election heats up, so finally did the conservation crisis in the country. That crisis is nearly entirely composed of the decimation of elephants in the center of the country, which is a stronghold of the ruling party.

If the ruling party loses the center of the country, it loses the election.

So the Queen of Ivory is nicely behind bars, has confessed, and guess what, won’t have to say a single other thing.

At least not until October 26.