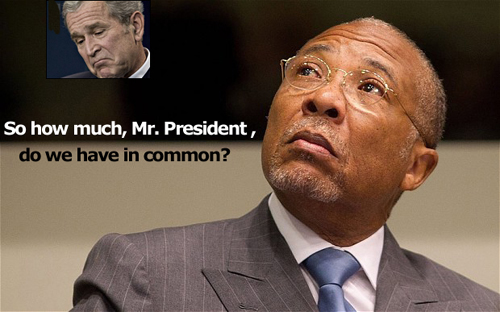 Charles Taylor’s demand that the World Court try George Bush is neither hair-brained or facetious and demonstrates the growing globalization of justice.

Shortly after Liberia’s former strong-man was sentenced by the World Court yesterday to 80 years for “crimes against humanity” he remarked to the press:

“President Bush… ordered torture and admitted to doing so. Torture is a crime against humanity. The United States has refused to prosecute him. Is he above the law?”

Well, the answer of course is, yes.

The World Court is playing increasingly pivotal roles in African justice, and thereby, African politics. Taylor was the strong-man now found responsible for the long blood diamond and blood resource war that devastated much of West Africa in the 1990s. His apprehension and prosecution in The Hague was fundamental to West Africa’s current fragile peace and stability.

Right now the Court is negotiating conducting a similar prosecution against Seif al-Islam Gadhafi, the son of Moammar. Seif is being held by a remote militia group in the south of the desert country, and they refuse to surrender him to current Libyan authorities. But they might just surrender him to The Hague.

Also right now, the Court is trying four prominent Kenyans – two of whom may become presidential candidates. Remarkably, the four are willingly traveling back and forth to The Hague for their trial, although there is wide speculation that as soon as proceedings become threatening to them, their schedules might just become too tied up for further international travel.

So it is really not just banana republic hyperbole regarding Bush. (Important to note, of course, that America is one of the minority of countries in the world that doesn’t recognize the World Court.)

Both Bush and Cheney have canceled multiple trips abroad in the last few years for fear of global prosecution. So even if we don’t recognize this new global justice, it does impact us.

Bush first found his travel restricted on what seemed like an innocuous trip to Canada in October, 2009. While speaking in Calgary, Canada, a warrant for his arrest was issued, but higher courts vacated the warrant allowing him to leave.

Bush then laid low for a couple years before trying, again, in October, 2011. He returned to Vancouver in the company of Bill Clinton. Once again the warrant was issued, and this time he snuck out of Canada by the skin of his teeth. An unusual “higher intervention” stayed the British Columbia’s court action hours before he left.

Bush has made no trips since.

But it was in neutral-grounded, ideologically-bereft Switzerland where both Bush and Cheney faced the most serious possibility of actual arrest. Both canceled previously announced visits when it became apparent authorities would actually apprehend them.

Cheney’s last cancellation was only two months ago, once again testing the presumed friendship if obsequiousness of our nearest neighbor and dearest ally, Canada. The mounting evidence of Cheney’s involvement in torture may have breached the threshold of “higher authorities” power in Canada to prevent his apprehension.

The growing evidence against Bush and Cheney specifically with regards to Guantanamo torture, as well as torture abroad during the Iraq war may not rise to the level of slaughter that Charles Taylor conducted in Sierra Leone.

But this isn’t a body counting analysis. Some actions like torture are no less wrong once than a thousand times. Taylor’s ordered massacres of tens of thousands may indeed be more horrible than Bush and Cheney’s torturing a hundred terrorists. And within that perspective the World Court has sentenced Taylor to 80 years, one of the greatest sentences ever levied by the Court.

So perhaps George Bush should be sentenced to 10 and Cheney to 20. Or something like that.

The point is that the world is developing a sense of global justice around a few top human rights’ issues like torture and innocent massacre about which there is little debate. Africa is taking the lead using the World Court, thereby contributing in a fundamental way to defining exactly what justice means in our increasingly compacted world community.

Whereas we, in America, risk global conflict by berating China for its poor stewardship of human rights, while our former leaders tiptoe across the world careful not to breach the lines of decency. It would be terribly embarrassing were Bush or Cheney arrested for torture, wouldn’t it?