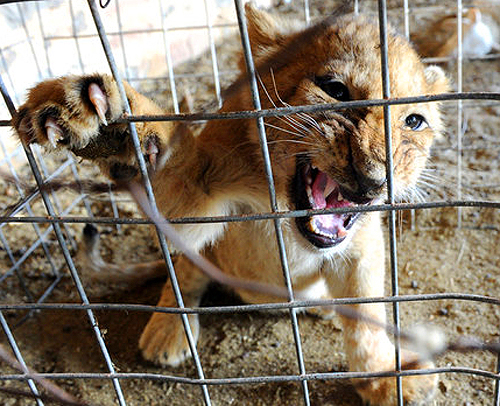 Like a hundreds of other tourists daily, at dozens if not hundreds of similar sites throughout Africa, Madelein Querk was looking forward to that special moment this past weekend when she could actually pet a wild animal. The lion cub bit her in the neck threatening her life, not just her holiday.

A proactive organization studying and promoting lion conservation in northern Kenya called for more “speed bumps” or road impediments on the relatively new Samburu-Marsabit highway after a one-year old lion cub was killed trying to cross the road this weekend.

The two incidents are in some ways dissimilar. The cub attack is the epitome of poor judgment, the logical extension of anthropomorphizing a wild animal into a pet and maybe even a cute little furry baby. The second incident is an excellent example of human/wildlife conflict, but with an error on the side of human.

But they are also strikingly similar in illustrating how we unsuccessfully try to commercialize the wild at great risk to both the wild and us. The wilderness, wild animals and spaces with little or new human intervention, can be protected and conserved to be sure, and generating revenue from those tourists fortunate enough to be able to pay to experience them is a legitimate way of doing so.

But both these examples show this dynamic going too far.

A lion cub is cute in part because we project babyness onto it, the same cuteness of our own experiences with human infants. Sensing helplessness especially is a strong effusion of empathy, and a cynic might even argue an elixir of personal power.

But why don’t we feel the same way when a baby snake hatches? It’s just as helpless. Or a baby shark or baby black widow. Because they’re deadly? So’s a lion. Ask Madelein Querk.

For some reason our non-Maasai culture has codified lions as cuddly but pythons as not. Point is, neither are.

But we commercialized the cuddliness into Teddy Bears and Lion Kings with this haughty notion of generosity filled with forgiveness and redemption until there are piles of childrens’ books affirming the true goodness of Aslan.

Well, lions are good. But not because they obey their mothers and do their homework and help invalid ladies across the street. Their goodness is affirmed when they tear apart a baby wildebeest and eat it alive.

The second example this week is bit harder to understand, and I concede before trying to do so that you need to share my bias first that humans are more important than wild animals. And that is not a bias I came to quickly or easily, and I respect those who differ. Nor am I saying Buddhism be damned. But in the competition of natural selection, I route for man.

The Samburu-Marsabit highway was built by the Chinese to get oil from the desert. They pay well for that privilege and Kenyans welcome the revenue which significantly exceeds the sales of entrance fees into Samburu National Park.

It is also a dangerous place, particularly since the conflict in Somalia came closer. The Northern Frontier has become quite lawless in the last few years. From one sanguine point of view, putting speed bumps on this highway would exponentially encourage shifta, bandits that are notorious in the area.

If Ewaso Lions can demonstrate that this is an integral crossing for lion in the area (as they implied in the article linked above), then build an over- or underpass tunnel as is regularly done for wildlife crossings worldwide. Slowing down the flow of traffic is routing against humans.

In my long career in the wild I’ve grown more and more fond of it. But at the same time I’ve grown more and more angry with attempts to commercialize the wild by either pretending that it is less wild or actually making it less wild against its own nature. And I get particularly furious at efforts to exploit our fantasy empathy at the expense of man’s preeminent needs.

Enjoy the wild for what it is, not what you wish it could be.