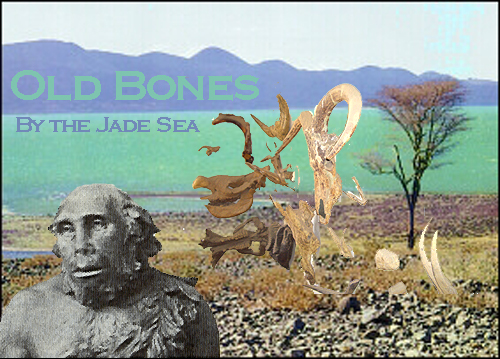 Mostly praise for PBS’ brilliant production “Bones of Turkana” with only a few important criticisms.

It was specially good to see Richard Leakey so relaxed and forthcoming. He is a man who has lived much of his life under attack or siege and a significant part of his non-paleontological public life remains clouded and unexplained. And until now, anyway, he has been withdrawn and reticent to assume such a grand public mantel.

In the darker days of Kenya under the dictator Daniel Moi, Leakey held two important government posts. The first was head of the Kenya Wildlife Service (KWS) and the second was head of an anti-corruption unit created in conjunction with the World Bank to rid Kenya of enough back room dealing that aid organizations would feel comfortable working with the country, again.

I do take issue with the documentary’s claim from Leakey that his pyre of ivory fire almost single-handedly ended the ivory market, thereby saving elephants.

It was much more complicated than that, and certainly Leakey’s strong-man tactics in the KWS, using every power given him by an exceedingly powerful and corrupt dictator, did enormous good to stop the extinction of elephants in Africa.

Before Leakey came to power in the KWS, Kenya had lost 90-95% of its elephants. There was wide speculation that the wife of the first president, Mama Ngina, was involved in the most massive poaching operation.

Leakey definitely stopped this, and the pyre episode was more than emblematic. But Kenya was not the only place in Africa where the problem existed; it was continent-wide. And the largest share of the credit goes to the CITES convention and treaty, initiated by the U.S. and Kenya well before Leakey’s involvement.

And Leakey’s abrupt dismissal (actually, his resignation just prior to dismissal) from the KWS was primarily caused by his stepping on the toes of one very powerful man, Ntimama, who was an ally of the president. And it just shows you, you don’t act like your boss to your boss.

Later Leakey would become the much celebrated head of the “Dream Team” set up to stifle corruption in Kenya. A version of that agency still exists in Kenya and isn’t doing too badly. But his brief tenure there and abrupt departure left many wondering:

(A) Was he just too frustrated without the authority denied him to clean house, or worse (B) was he corrupt, too. Did the head of the snake come round to bite the tail?

That damning accusation remains unanswered and many close to Leakey insist he won’t address it for fear of legitimizing an absurdity. I think that was wrong. Leakey never explained why he left the Dream Team and the accusations remain unanswered.

Leakey was never the affable and sometimes flamboyant star that his father, Lewis, was. From the beginning he was much shyer, assuming I believe the shadow that most white Kenyans lived under during his generation. After all, remember that he lived not just through a global era of emancipation, but in a newly independent country previously ruled by a twelth of the population of which his ancestry played a significant part.

It was actually his mother, Mary, who was the discoverer of Zinj. Yet it was not until after her death in 1980 that scientific publications credited her, rather than her husband, Lewis, with the find.

And to be white, in a newly independent black country, must have been difficult.

And the family was one of the most dysfunctional on earth. There were three feuding sons. One fled to Europe. One became an idiot politician in Kenya on the side of the dictator. And that left Richard as the only publicly sane figure. When Richard needed a kidney to stay alive, the idiot politician balked for months before agreeing to the operation.

I first met him at Jane Goodall’s second wedding in Dar-es-Salaam in 1981. Later I got to know him better when I was working with a Chicago filmmaker, Dugan Rosalini, who tried unsuccessfully to make an early documentary about him. I then lost touch with him until meeting him again at a reception in Chicago honoring the 100th birthday of his father.

Throughout these many years he remained withdrawn, terribly scarred I felt from the two public disasters in Kenya. Yet also during these years his successful scientific battles became legend, and his several books and other publications baseline studies for all paleontologists, today.

So another slight criticism I have with the film is that Leakey’s own explanations of our human origins suggest to the less informed that humans evolved in some linear fashion, from say Australopithecus to habilis to erectus to ourselves.

That had never been Leakey’s position. It was the position of his arch-rival, Donald Johanson, the discoverer of Lucy. Lucy was the closest rival to Turkana Boy in terms of completely found anatomy.

It brewed a terrible and bitter fight between the two men, finally resolved when Johanson conceded in Time magazine’s millennium edition that he had been wrong, and Leakey right.

About what? That human evolution is not linear.

I don’t really think that Leakey intended to imply linear evolution, but the film failed in this regards to highlight how important his opposite view is and was.

There is no doubt in my mind that Leakey is a great man. And not just as a paleontologist. His love of Kenya and attempts to become a valuable civil servant and later politician there were perhaps ahead of his time. And the actual service he provided was probably necessary and beyond realism to suppose anyone else could have performed, then and there.

But the sum total of his life made him an inward man. And this film may have changed that.

Some good wines improve with age. Particularly when left in the dark for a while.