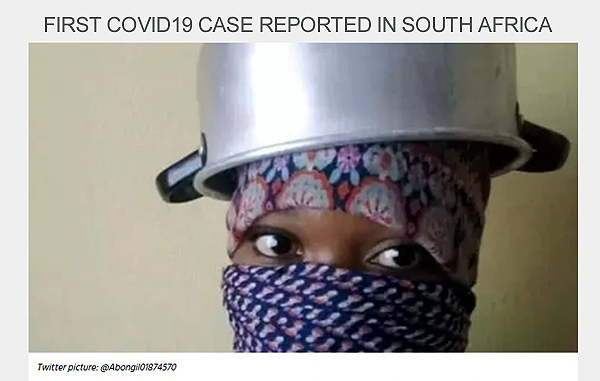 With South Africa’s first confirmed case of Covid19, some experts say that the virus is unlikely to spread much in Africa.

“The virus is very sensitive to heat,” she explains, “so [our current] temperatures are basically too high for the virus.”

Other experts, however, disagree:

“We absolutely don’t know,” says Trudie Lang at the University of Oxford. “I keep asking virologist colleagues this and nobody knows. So when you hear people say the weather will warm up and it will just disappear, it’s a very unhelpful generalisation,” she says.

The anecdotal evidence for Africa, however, suggests it might be. It took less than a week for the virus to spread in the U.S. and Italy once it arrived, but it’s now been more than a week since the first cases were reported in Nigeria and Algeria and they do not seem to have spread.

South Africa is much less tropical than Nigeria and is heading into its fall, the normal flu season. While reporting the first case of an Italian who had flown into the country, the South African health ministry advised everyone “especially this season” to get their flu shots.

There will be many, many days in South Africa’s hinterlands when day time temperatures will not reach anywhere near 75F. By June much of southern Africa south of the Zambezi River will experience regular frost and freezing temperatures.

Africans of every stripe seem to be more superstitious and capable of the most outrageous ideas, so the arrival of the virus has unleashed a maelstrom of misinformation.

AfricaCheck is a much respected continent-wide debunking organization with its head office in South Africa and branches in Nairobi, Dakar and Lagos. “We’ve seen everything,” the deputy chief editor Kate Wilkinson told South Africa’s News24 yesterday.

“If you can think of a plant or a medicine, there is probably a message online saying it can cure or prevent Covid-19. Lately, we debunked a message saying garlic taken in large quantities can help prevent the virus or cure it. There is no evidence that this is true. I do think, though, if you did take that much garlic people wouldn’t want to be near you!”

Dettol – like Rooibos tea – is considered a cure-all by many South Africans, so Wilkinson and even the South African government are going to great lengths to quash the sudden demand for the products in grocery stores and online.

Last night a tweet went viral claiming that the U.K. manufacturer of Dettol actually created the Covid19 virus knowing that only his product could kill it!

As is always the case in South Africa, believe it or not, there is a lighter side to all of this: “From funny pictures showing people wearing masks made from a myriad of cloths to memes and videos, locals have show that it will take more than a virus … to get them down.”

“After years of wearing uncomfortable condoms to prevent HIV,” one South African tweeted, “now I’m going to be killed by a cough.”

In some ways it’s good to hear that. Personally I think most of the world is exaggerating the actual threat of this virus, and this is no attempt to minimize its reality. It’s just that today it’s so hard to calibrate truth. Similarly, it’s easier to accept an inept IRS than a CDC.

Still, thanks South Africa for maybe bringing this down to earth.