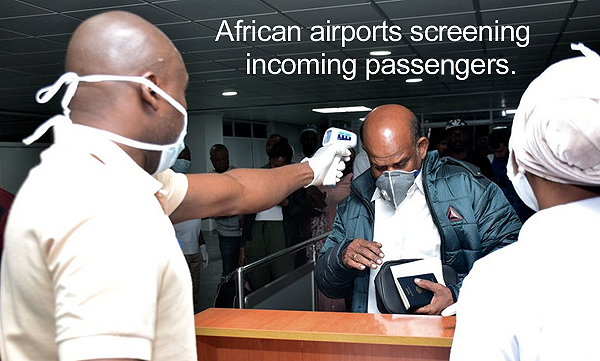 Coronavirus is creeping into Africa but at a much slower rate than some expect given the high levels of transport exchange between Africa, China and even Italy.

South Africa reported a seventh case, prompting a school closure in a suburb of Johannesburg.

Twenty-two passengers who arrived Uganda yesterday from China, Korea and Italy were given the option of two weeks self-funded self-quarantine or to turn around and go back. They all went back.

The Ugandan Ministry of Health explained the new policy of banning travelers from China, Spain, France, Italy, Iran, Germany and South Korea was formulated after a 60-year old German citizen died in a hospital in Egypt yesterday from Covid19, the disease caused by the virus.

All African airports are screening arriving passengers with temperature guns and then offering quarantine or immediate return for those who show a fever. The problem is that it is not clear the airlines will accept passengers with a fever for their return.

South African university heads held an unusual emergency meeting to create plans for dealing with the virus if it hits the country’s campuses as the fall sessions just begin.

There are no reported cases in East Africa, but the virus is causing mayhem anyway.

In Mombasa yesterday the staff including doctors, nurses and receptionists ran out when two Chinese nationals came in to ask that they be tested for the virus.

Kenya’s economy is already in deep decline because of the virus.

In a survey published yesterday by Kenya’s Business Daily 60% of the country’s businesses are being serious effected, particularly horticultural products like tea, coffee and fruits, as well as the country’s previously booming mining and oil industry.

And that leads me to my take on what’s happening in most of sub-Saharan Africa: fear. There are currently very, very few cases and only a handful by community transmission (in South Africa).

The exaggerated fears, however, are self-fulfilling. If doctors run out of hospitals and airport officials send back incoming passengers just because they arrived from a place that had a citizen who died somewhere else, it becomes increasingly hard to convince travelers to stay the course.