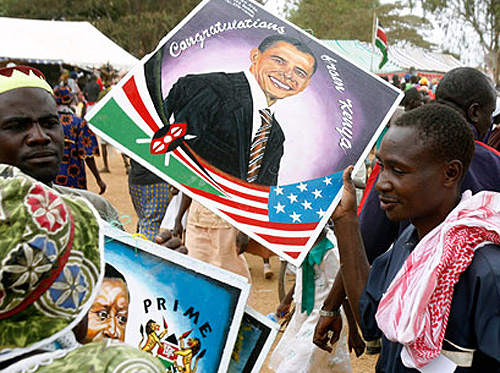 Obama’s end-of-July one-day visit to Kenya is causing as much controversy as Bruce Jenner’s to the New York Gym. Why?

People leaning left like Robert Rotberg writing in Politico have a litany of reasons topped by a presumption it’s too dangerous. To me that proves many on the left are as dangerously myopic as they claim people on the right are.

Those on the right see it as an opportunity to prove the birther theories.

Even many Kenyans are shocked by the cost and expected mayhem that will result from the single-day visit.

The White House announced the visit several months ago. The principle reason given was that Obama will attend the 6th annual Gobal Entrepreneurship Summit, which is traditionally hosted by developing nations whose economies are showing significant promise.

I think that announcing the date of his visit several months in advance is tempting fate, and I wouldn’t be surprised if his arrival an departure details changed at the last minute. But there are many diplomatic reasons that Obama needs to visit Kenya, now.

First is that he’s already visited Tanzania. Tanzania and Kenya are the Tweedle-Dee and Tweedle-Dum of East Africa, but security at least until recently has always been better in Tanzania if for no other reason than it’s a few hundred more miles from Somalia.

But visiting the poorer cousin scoffs the successful one and Kenya’s security has definitely improved.

At the time of the Tanzanian visit the president of Kenya was under indictment by the World Court for crimes against humanity. Those have now been dropped removing that very significant diplomatic barrier.

Kenya’s role in the “liberation of Somalia” and thus a necessary component of Obama’s pursuit of world terrorists was singularly important, entirely supported by the U.S. Kenya was in effect the U.S. proxy. It’s understandable Obama wants to validate this relationship.

After nearly a decade of monopolizing Kenyan investment, the Chinese have retracted somewhat. This gives the western world important entres they didn’t have just a year ago. Coupled with the GES conference, Obama’s hard-core reliance on capitalism necessitates he recognize this situation.

Finally, I’ve never felt Obama mastered his position of power as he should have. He will go down in history as a weak president. I’ve also felt his spirit was robust, it’s just that he was entrapped by the enormity of the institution. For example, he appointed Elizabeth Warren to oversee his most significant reformation of the financial system even while retaining as his closest advisors the people she is most critical of.

So, perhaps more hopefully than realistically, I see Obama visiting Kenya as a rebuff to his own administration’s ridiculously layered and duplicate travel advisories on Kenya. I know that tourists don’t have an extra $60 million to drop out for their security, but still, if the President can go, why shouldn’t you?

In some form esoteric or otherwise I think Obama wants to deliver this message.

So it makes sense, diplomatically and psychologically, and with the power of a reinvigorated CIA and chance changes in scheduling, a net plus for everyone.

So I’m certain it will happen. My ultimate source for this opinion is Mama Sarah, Obama’s step-grandmother and closest living relative in Kenya. He’s visited her before, but …

…she expects him, again.