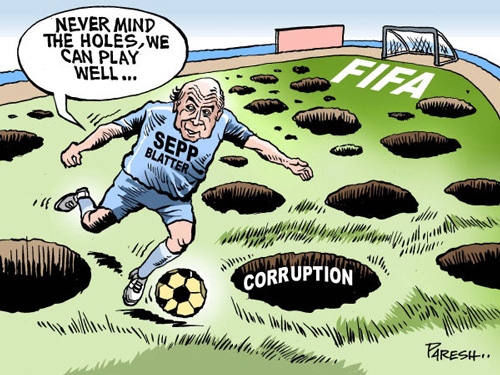 Was South Africa the first African country to host the World Cup because it was Africa’s richest and corruptible?

South Africa was awarded the 2010 World Cup after a surprising vote in 2006 by FIFA and strong support by the then FIFA vice president Jack Warner.

The U.S. indictment Tuesday alleges that two South African co-conspirators (#15 and #16) handed Warner a briefcase of cash composed of multiple $10,000 stacks and separately connived with FIFA officials in Switzerland to divert $10 million allocated to helping South Africa prepare for the match to Warner’s personal control.

The two illegal acts of bribery and corruption, according to the U.S. indictment, secured Warner’s support and vote.

Warner later resigned from FIFA, although he kept his positions at the top of the football mafia in his native Trinidad and Tobago. In the last several years he’s been arraigned several times for various corruption charges.

He had been in jail in Trinidad earlier this week, faces more indictments from the current FBI probe, but had been released by a Trinidad judge for “exhaustion.” Hours after his release from “exhaustion” he held a raucous rally of political supporters which included the 72-year old in feverish dancing:

“’If I have been thieving FIFA money for 30 years, who give me the money? How come he is not charged?’ the 72-year-old declared.

He then charged the U.S. FBI with “only going after Third World Countries.”

It’s much easier to contain and arraign someone who is in Zurich than Trinidad.

South African officials, of course, have denied all the allegations. But the leading contenders for co-conspirator #15 or #16, including Danny Jordaan, a newly elected mayor and high-ranking ANC official, have been stone mum.

Like Brazil, South Africa’s World Cup experience was a disastrous financial experience. Like Brazil, extralegal procedures to displace people and condemn needed land and space were only controversial outside the country itself.

The cup is supposed to be played soon in Qatar, a country in a desert where summer temperatures are above 120 F. Qatar is richer, per capita, than either Brazil or South Africa, but the “slave labor” being used to build its massive stadiums for the cup have been reported now for quite a time.

The scandals surrounding FIFA officials are hardly new, either. FIFA officials regularly go in and out of jail. The organization is run like a fiefdom the same way the Olympic Committee is run, but at least until now no one cared.

This is because the prestige of the World Cup, like the Olympics, is extraordinarily huge. The outcome, the Games, trump everything that runs up to them.

The ends justify the means.

South Africa is terribly implicated although no South Africa has been yet indicted. But the story coming out about FIFA is less about South Africa than FIFA, and basically that South Africa like Brazil finally achieved enough wealth to play with the big guys.

And the Big Guys are not African.

Whether it’s another Dennis Haestert, Bernie Maddow, Michael Milken, or dozens if not thousands of lobbyists and PACS and corporate “deals” corruption is not an African disease, it’s an American and western disease.

And now maybe that the western world’s most cherished “not-for-profit” organization is being unmasked for what it really is, maybe now the world will admit what a bum rap Africa’s been given.