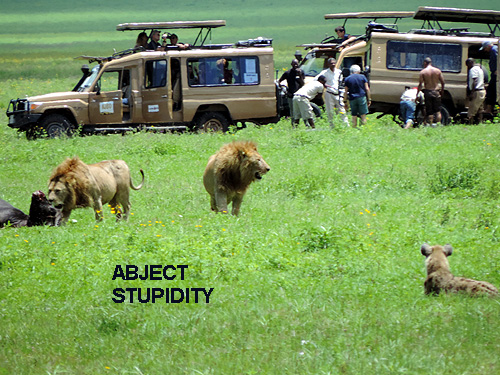 The young American killed yesterday by a lion in South Africa was as irresponsible as the lion park she was visiting.

Fatalities and serious injuries to visitors to these improperly named “parks” is exponentially greater than in the real wildernesses of Africa. I see these obscene facilities as modern gladiator stadiums built specifically to create the mauling of humans.

The yet-to-be-named 22-year old was in a sedan car in the Gauteng Lion Park just outside Johannesburg. (At the time of this writing, the website for this very popular facility was crashing or was taken down. Its address is http://www.lion-park.com/.)

The park places signs throughout the driveways telling visitors to keep their windows closed. This woman was photographing the lion through her opened window when she was attacked.

Last year 60 Minutes did a fabulous expose on this place. Shadowing one of the human keepers, the investigation revealed not only the inhumane nature of the park from the animal’s point of view, but that the park was breeding lions for “canned hunting.”

Canned Hunting is one of the most barbaric attractions of South Africa (and Texas, by the way). Big, naturally wild animals are raised from birth and tamed, then released to be shot by idiots who pay to do so.

Admittedly, I sometimes wonder even on one of my real safaris into Africa’s real wildernesses how visitors lack any respect for the vagaries and exigencies and chances of the wild.

Less than a year ago I was in the crater when through my binocs I saw a car changing a flat tire … quite normal, by the way. But it was right in front of a pride of lions. And hyaenas! And they were eating a kill!

Not only were the guides changing the flat endangering themselves, but they seemed from the photo I took to have completely neglected their clients, who were wandering about as well!

There were multiple ways they could have changed the tire without exposing everyone and themselves to danger, beginning with something simple like moving a car between the lions and the car… or, hey here’s a thought: call the rangers!

These two situations are perfect examples of the reckless and feckless attitude so many people have to the wild.

Large animals can be tamed, to be sure. But they will never earn a degree from Final Touch. Their normal behavior, like an elephant making a turn, can be deadly.

But more to the point, wild animals can be tamed to a point, but that point is never a safe one. Hollywood may judge the risk worthwhile. Circuses are more controversial.

But really wild animals like lions make no sense on our planet except when they’re wild. Altering their behavior is dangerous.

In the crater, where far too many people ride around in cars pretending to be in the African wilderness, a transition occurred more than a half century ago where the animals became much less fearful of people. That’s good … for tourism, but bad … for wild animals.

Degrees of tameness can now be seen throughout all of Africa’s wilds. I personally am most frightened of those areas where the tameness is greatest, like the crater. That’s where the unpredictability of wild is most frequently tempted by voyeurs of the wild.

In South Africa today there are more lions in these private parks than in South Africa’s excellent true protected wildernesses.

And yet, if you believe TripAdvisor, these are the places to be!