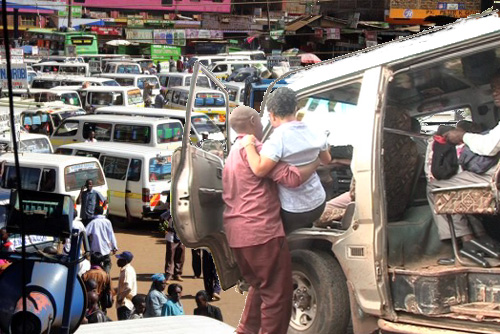 Wonderful news out of Africa to end your week: #matatukindness.

Matatus are private taxi/limos in East Africa’s big cities. They are so much cheaper than a regular taxi and so much more dependable than public transport that by one account they handle more than 90% of Nairobi city’s passenger transport.

Some like me have argued that it is free enterprise gone wild, because there are never enough matatus, so the demand is extreme.

But this is African capitalism, not Adam Smith’s. High demand doesn’t necessarily mean high prices. Even the most desperate clerk trying to get to work or the most dedicated teacher trying to get to school will refuse to pay more than she feels justified.

This stressful and never-ending battle between “tout” (the guy in the matatu calling out its route to potential travelers, deciding if someone is too big to fill the remaining tiny space available, and negotiating, collecting and providing change for payment) and the passenger is one of the most dynamic and pervasive African-capitalist transactions in East Africa, today.

I actually think it effects the price of airline tickets and Mercedes C class.

Imagine a car park with 600 too many vehicles somehow nearly stacked on one another and filled to the brim with human life, and the “tout” arguing with the last passenger for the last available space (with 60 other passengers screaming behind her) over whether it should be 100 shillings or 95 to Limuru.

That’s life in the big city. But this absolutely essential commodity, transport, creates a working class of people that are pretty adamant in what they should pay for things.

Little sympathy goes to the poor matatu owner, driver and tout. That’s understandable when the media uncovers huge matatu mafia magnates. In Swahili transliteration it became Mungiki, which lingers even today in certain parts of the Rift Province as real organized crime.

The current president of Kenya, Uhuru Kenyatta, had been charged in the World Court with a variety of crimes linked to his involvement with Mungiki.

But in the last several years the Kenyan government has managed to separate a lot of Mungiki from Matatu, and to be sure, there are many small, independent matatu owners.

One of them, Josphat Mwangi and his tout, James Njau, have caused a marvelous stir in the mayhem of matatus. For nearly two years, now, they leave the market high prices of rush hour for a short time so that they can transport for free disabled persons.

One of Kenya’s struggling but persistent local organizations is the National Council for Persons with Disabilities.

Hardly two or three generations ago, most Africans born with a disability were killed. Even today a stigma is attached disabled persons that makes survival except in the more developed cities problematic.

“We at the council have persons with disability forming half of our staff [who] were resigning … because of transport challenges,” said the council chairman, Dr. David Sankok.

So enter Mwangi and Njau. No special devices or special cars. Just leave the market at its highest bid, carry the deserving person into a seat in your matatu, pack their wheelchair or other implements then transport them for free.

Neither Mwangi or Njau have spoken publicly. They don’t have time. There’s another fare waiting for Kinoo!