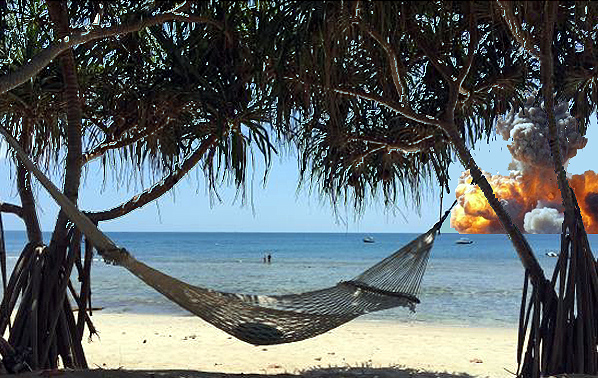 Not so long ago I was lazily swinging in a hammock in Manda Bay. My son and his girlfriend were blithely watching the sunset over the island from their open verandah above me. Yesterday, terrorists blew up that place, now an American air base.

Readers of my blog won’t be surprised there’s an American air base in Kenya, since I’ve been writing critically about American troops in the area for nearly a decade. But what happened Sunday is a perfect example of American policy unweaving all over the place. We’re unscrewing the lid on terrorism.

Although Kenya has been acting as America’s proxy in Somali since 2011, there has never been an all-out military action within Kenya until Sunday’s attack.

It reflects a bigger game the western world is losing in the military battles against terrorism, which I’ve denounced all my life.

Al-Shabaab in Somalia was almost eradicated by 2017, by a Kenyan army that Obama created and nurtured. By 2018 refugees in the world’s largest camp, DaDaab on the Kenyan/Somalia border, were returning home. A real parliament was elected in Somalia. Dry cleaning stores reopened in Mogadishu!

Then came the Trump Administration with erratic, reactionary policies that wrecked havoc on everything the Obama Administration had done. Mind you, I never liked the original policy to begin with, but it was coherent and it had short-term successes.

And singular often random acts abandoning wrong policy is not a way to rectify it.

Somalia and Manda Bay is the perfect example of this.

Al-Shabaab has reappeared big time in Somalia. It’s not the proxy of Iran like similar groups across the Gulf in Yemen or even in Nigeria. But it shares the Islamic furries that all terrorist militias feed on, and it definitely staged its attack on Manda Bay as a show of solidarity with Iran following the killing of Soleimani.

In my blogs I’ve documented the slow resurgence of al-Shabaab, starting with Trump negligences funding and redeploying American troops in the area, resulting in stupid oversights like the fact that reducing soldiers guarding supply trucks but not reducing the number of supply trucks means they’ll be blown up more often.

If this were all a meaningful plan to retreat from global conflicts it might even have my support. But that isn’t what it is.

What it is is adhoc actions, like reactionary tweets. You can’t tweet battle. This administration has no idea what it’s doing because it has no understanding of what’s come before and no interest in safety or security beyond the appearance of the moment.

Kenya, of course, now suffers the most and its young people in particular are beginning to realize that the alliance with America was no guarantor their own safety.

This is right on the tourist circuit in an area known as Laikipia. The break-in occurred less than three miles from the famous Mt. Kenya Safari Club.

Police are being tight-lipped about the event but have confirmed the three were not armed with weapons but with sophisticated camera and cyber technology. There was no fighting. When discovered the three immediately surrendered to police.

Meanwhile Kenyans have deployed considerable new security in the area of Lamu and Manda Bay, even as those living in far northeastern Kenya have begun to flee south, suggesting that locals fear more attacks are coming.

Publicly Kenya’s taking it all on the chin, incapable of risking that American support might erode further if there were any overt criticism. But I can tell you from my friends and contacts that the Kenyans are furious with America.

They know the Manda Bay attack is directly linked to the killing of Soleimani, but it was less a surprise than a validation of their understanding America has become erratic, goofy and totally unreliable.