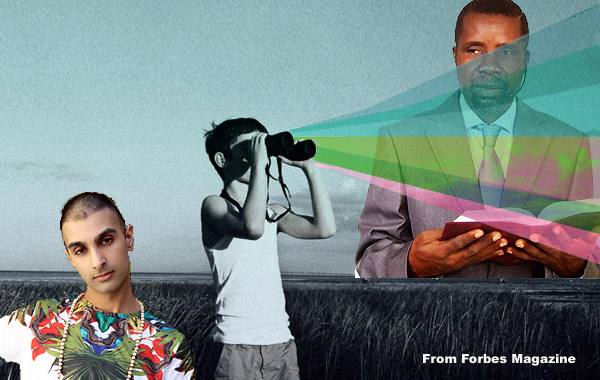 In many parts of Africa a new year – and especially a new decade – begins with somber predictions from seers and religious leaders whose adoration depends upon their past reliability.

So there you have it.

Predictions are built upon the past with hope and consternation. In Africa these usually lengthy and extremely detailed predictions are taken quite seriously.

Aujula explains his seeing comes “just when I’m walking around” or in dreams when “the logical side of your brain is switched off, giving more room to your intuitive side.” Dreams are stronger, surer, he says.

That makes sense. If sense is to be made. All the super computers in the world can’t pinpoint anything. The scientific method and other patterns of reasoning – even chaos or probability theories – wobble under today’s mountains of available data.

So go back to the seemingly simplest way of foretelling what’s going to happen: the hunch.

Olagunju has an amazingly good record.

“In my 2017 prophecy, I predicted that there was going to be sharp misunderstanding between Buhari and Osinbajo as a result of political differences.”

Olagunju is a deeply respected, old evangelical pastor in Nigeria. Aujula is a young psychological therapist in Kenya. Aujula’s predictions are hipper:

“I’ve had visions of Paris Hilton announcing she is having a baby, a scandal around Lindsay Lohan and Jennifer Aniston starting a significant new relationship. I’ve also suddenly become very aware of Amy Winehouse, so I wonder if there will be another death of a young female singer in the headlines.”

There are many Olagunju’s and Aujula’s throughout the continent. Don’t mistake them for horoscope writers or almanac publishers. They’re deeply respected and consulted by the moguls of business and government alike.

The more specific their predictions are, the more they deviate as evidenced by the notions of what will happen to Trump.

But on a more general and global perspective there is chilling agreement:

“I’ve seen lots of visions of protests – people taking to the streets, not so much just here, but all over the world,” Aujula says.

Olagunju “asked the living God why all these problems.”

“Thus says the Lord, He God of heaven is angry … [because] the leaders brought all these demons, gods of this world, worshiped, praised, served, erected mansions, named streets after them in a satanic manner. Should the leaders fail to stage a repentance crusade seeking the face of Almighty God in righteousness, God further revealed that the nation [world] would continue to move from one problem to another and from one crisis to another until the nation [world] breaks up.”

Seers do not have a great record of predicting happiness, but the dearth of such predictions this year is striking.

Predictions grow from an understanding of the past. If the past isn’t understood, the future is unknown.

“This one is really bizarre and random, but I’ve seen visions of a floral cupcake dress going viral.” – Aujula, Jan 1, 2020