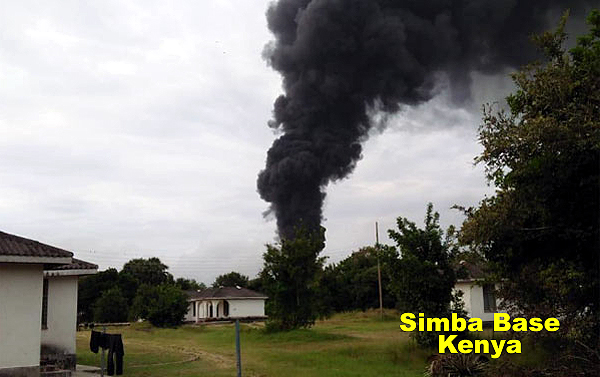 Something bad is happening and Africa is the bellwether. A couple specific events that I’ve chosen to discuss below in Kenya and Nigeria suggest security is failing or at least being so stressed it’s not working well.

And these events are but a drop in the ocean of what must be happening throughout Africa, likely the world. Something bad is happening.

Excellent Kenyan reporters are publishing minute details of the Sunday bombing of the Simba military base in Lamu, which included an American drone base and a Kenyan naval station.

First of all get out of your minds Fort Bragg or some giant military complexes. These are hardly more than a bunch of poorly maintained concrete buildings that for all the world could pass as a remote boarding school. Drone bases are high tech, but they don’t have big hangers or cranes or lots of military vehicles buzzing around. You’d hardly think of them as military.

And the Kenyan naval base is even less sophisticated than most boarding schools! At best it looks like a police station.

That being said, they were rather large, with a couple hundred soldiers and sailors, contractors and other personnel. The U.S. will not reveal exactly how many U.S. soldiers were there, but I’d guess it was around 50-80.

The “security” around the airstrip that served both facilities was a double strand of knee-high barbed wire.

There were 5-6 “terrorists.” They drove a single Landrover vehicle stuffed with massive weaponry including grenade launchers. They started their attack in the middle of the night about 10 miles from the base at the biggest town in the area, Hindi. They went straight to the power grid and clipped the line, effectively cutting the power to the bases.

I presume the America base was equipped with its own generators, but I doubt the Kenyan base was.

When they reached the base, the terrorists practically stepped over the barbed wire perimeter with lots of their equipment and then began rather random bombing. Several drones and one Kenyan aircraft were damaged, but none beyond pretty quick repair. A fire was started when one of the grenades landed on a fuel tank.

The response was quick. Five of the six were almost immediately killed by security (we don’t know if the responders were American or Kenyan) and one apparently escaped. By the next morning Kenyan police rounded up another half dozen individuals who they now claim assisted with planning and implementing the attack.

I wish it ended there. But Kenyan reporters discovered that all around the area terrorists had been active the week before, raiding farms and stores and harassing police. In an area that had been pretty secure in the last several years, it suddenly no longer was. It’s very hard to know if these were truly terrorists incidents or just bandits taking advantage of decreasing security. I tend to think it’s the latter.

But it didn’t end with that. Early this morning four civilians and two alleged al-Shabaab terrorists were killed in a gun battle at a police post in the far northeast of Kenya. Several buses traveling the coastal road from Lamu to Malindi to Mombasa have been held up and robbed. Again authorities say they were “terrorists.”

Not yet, I don’t believe. I think that these escalations are the result of Kenyan security moving to urban and high profile areas like Simba Camp, opening wide opportunities for highway robbers and local thugs.

It’s not just Kenya. There’s been a significant resurgence of militant activity in Nigeria and I was actually heartened to read the Nigerian president’s statement about it.

He’s a devout Muslim, and he appealed to the country to decouple religion from terrorism. This is so important and hits the mark as to a significant problem today, as bully leaders further divide the world to their advantage, often using religion, or migrants, or “terrorists” as the reason.

But even as President Buhari was wisely admonishing
us as not “to turn against one another because of our beliefs,” Mike Pence laughably told anyone stupid enough to listen that the attack on the Simba Base in Kenya was planned by Soleimani.

Give me a break. And stop it. This is laughable but deadly. Pence like maybe even Trump is a stooge, duped by the intoxication of power and throwing poison darts at a kindergarten class of ill-informed and now fearful Americans.

Grow up. Be real. And tell the truth.

Is that too much to ask?