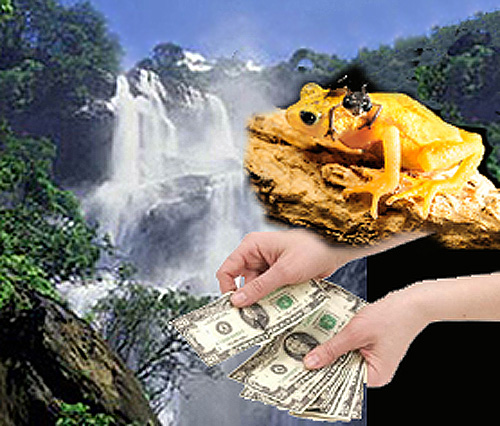 Millions have been spent to save a tiny Tanzanian toad. An incredible story with an incredible bill. Is it worth it?

Needless to say it was not Tanzania that saved the toad. Tanzania had no qualms about replacing a tiny toad with a dam that now produces a sizable portion of its needed electricity.

It was supporters of the Bronx and Toledo zoos and the Wildlife Conservation Society and to me it’s one of the most exciting success stories (so far) in worldwide conservation.

But I wince at the cost, not fully revealed but capable of sour estimation.

The Kihansi Spray Toad Nectophrynoides asperginis was only discovered in Udzungwa in Tanzania in 1996. Udzungwa is one of the most magical places in East Africa, a Tanzania treasure in part because it’s so huge and inaccessible.

I’ve climbed the granite edges of one of its many, many waterfalls and there are incredible similarities to jungles around the world in terms of the density and variety of species, towering canopies and peat laden forest floors.

But quite unlike most of the world’s jungles, this is not a flat place. It’s forever mountainous and cavernous with some stupendous drops. Ergo, waterfalls.

This tiny little creature lived in the spray of one waterfall.

Really?! I think it’s premature to suggest that’s it, although most of the scientific literature says so: that’s it. Five acres. Kihansi’s world is twice the size of the little cliff on which sits my current home. But so much of Udzungwa has yet to be carefully surveyed, might there not be other Kihansi toads somewhere else?

But the scientific community mobilized in the presumption this was it. Five acres. And five acres of misty waterfall sides that would disappear when a dam was built in 1999. And all of this came to pass.

Dam for Tanzanian development. One of maybe hundreds of water falls stopped. Spray ended. WCS scientists monitored the demise of the species after the dam began functioning in 2000, and in five months the population crash was so severe, they collected nearly every last one they could find : 499.

The toads were rushed to the Bronx Zoo, bred quickly and dispersed to five zoos around the United States. Only one other zoo, the Toledo Zoo, was able to create a sustainable population.

Despite multiple scientific surveys of the area subsequently, no toad was seen in 2005, and in 2009 the IUCN officially declared the toad extinct in the wild.

Enormous science was garnered from this little thing. It’s an unusual toad, with its babies born alive, not as tadpoles. One remarkable discovery occurred when scientists desperate to save every last one performed a C-section on a dime-sized mother and learned that babies were at one stage tadpoles, only living within the body of the mother.

So the Bronx and Toledo zoos prevailed through fungus diseases, lighting problems and discoveries that America’s “pure water” would kill the creature. Soon lots of toads were being produced in two zoos.

Meanwhile back at the World Bank which produced the dam which squashed the toad which motivated this worldwide conservation effort, successful conservation lobbyist mined funds to build a gravity-run misting machine in Kihansi Gorge to recreate the original habitat conditions.

And in mid-August this year toads were flown back to Tanzania, where they were monitored and nurtured for four months before being freed back in Kihansi Gorge in the spray of the artificial waterfall spray mahine, about ten days ago.

“I’m guessing it’s in the millions,” one of the lead scientists, Dr. Jennifer B. Pramuk, curator of herpetology at the Bronx Zoo, estimated for the New York Times the cost of just the misting machine project.

Machines break a lot in Africa, even simple machines, and repair isn’t simple, even simple repair. Reconstructed habitats are never what they’re intended. Imagine the global warming changes that have effected the region in the 7-10 year absence of the toads from the area.

We’ll see with time. Remain vigilant, as I will be, because what happens to Kihansi will be fundamental to decisions to save other species in years to come.