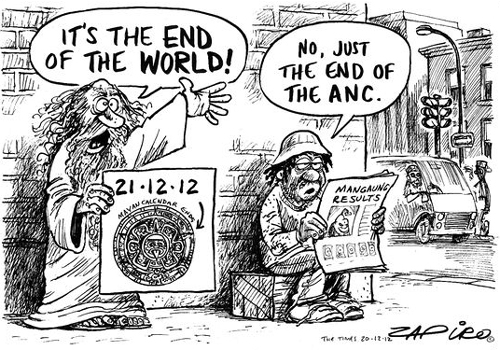 Much like China’s communist party convention, South Africa’s ANC convention that ends tomorrow was supposed to determine who runs the country for as long as the next decade.

South Africa’s African National Congress has run South Africa since the end of apartheid with its standard bearer and first president, Nelson Mandela. The ANC’s history goes back much further than Mandela, though, well back into South Africa’s racist history. And quite often the ANC vied with the much more radical communist party of South Africa for political control.

And it usually won. Nevertheless, over its century of existence the ANC was decidedly leftist and especially recently just before the end of apartheid. Its structural models are larger Chinese, its leaders having been trained in Tanzania by Chinese functionaries.

I think it’s a good model for a developing society, and it’s a model that societies thrust into democracy mode too early often collapse back into; ergo, Egypt. Democracy can’t work unless a good portion of the electorate vote their conscience and a good portion of that have a rational understanding of their own self-interest.

If you don’t know why there’s a drought, and you don’t know how much a pump costs or have any idea how it’s made, and have no clue as to what an aquifer or reservoir is, as a farmer you have no ways to guarantee your own security.

And easier than understanding global warming, or market economy or hydrology, is to find someone who looks nice and claims to know all these things, your neighborhood dictator, who can assume a softer image by pretending to be a cleric or other type of grandfatherly godhead. Stalin was affectionately referred to as Grandpa.

The ANC was traditionally a collection of South Africa’s most prestigious black intellectuals and its central committee, like communist parties everywhere, was the helm of the ship.

And when the ship became the state, so did the ANC. Although an election for president of South Africa happens regularly just like here at home, the choice of the ANC candidates is made at their convention, and since Mandela and the mid-90s, whoever the convention nominates wins nationally.

And that convention is anything but democratic. It has all the bells and whistles of democracy, including women’s groups and youth group’s and worker’s groups, but all these groups are carefully fashioned by the central committee and it’s basically just a reenforcing loop of a small group of powerful men.

All this works more or less tidily provided …

South Africa’s current president is a wacko. In a mature democracy, we tolerate wackos at the top with moderate difficulty, like George Bush, II. It gets harder to do so when their understudy, Dick Cheney, is even more a wacko, but democracy is not as top-heavy as more socialist forms of government, and you don’t have to drill down too far to get to people like Colin Powell and and the legions of good civil servants.

The problem in a top-heavy system like South Africa’s is that it there is no working grass roots. There is no Colin Powell under whom serve a lot of hard-working, dedicated citizens. What you see at the top is what you get at the bottom. And so these last few years in South Africa have been a mess.

While the rest of Africa was growing gangbusters, South Africa was muttering along. Social goals like housing for millions of displaced poor fell decades behind schedule. Labor strife, particularly in its crucial mining sector, continues to be near catastrophically violent.

And the personality of the current president is…. well, wacko. He has multiple wives, believes he can protect himself against AIDS by showering well after sex, unapologetically has pilfered public funds and then publically ranted against cartoonists who portrayed him as unsaintly for doing so.

He’s escaped numerous prosecutions for malfeasance and criminal misuse of federal funds only to flaunt his accusers by building personal mansions with public funds. And the with this top-heavy system, it means that corruption and clowning now occur on a daily basis in the smallest municipality.

And this week the ANC nominated Jacob Zuma to be president, again.

What a joke. But here’s the rub.

A good portion of the South African electorate is democracy savvy. And already local governments in Cape Town and a few other cities have thrown off their ANC shackles.