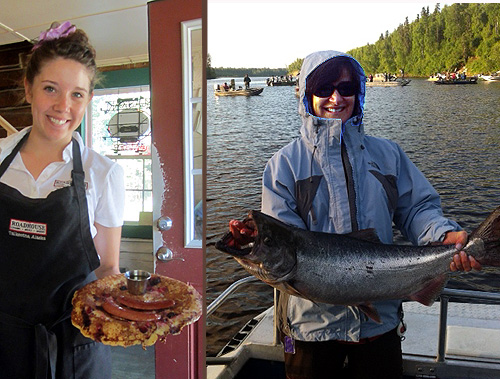 Seventy-five pounds of king salmon and probably half that of sourdough pancakes: that’s Talkeetna, Alaska, bumper stickered around town as “A Quaint Little Drinking Village with a Climbing Problem.”

After our adventure in the wilderness in Denali we spent two days at the park’s far southeastern end in Talkeetna. This is where all the climbers start. There are only four air charter companies with rights from the National Parks Service to actually land on Mt. McKinley and they all bay in Talkeetna.

Some folks went jetboating, some river rafting, others fishing and everyone had the Roadhouse sourdough pancakes.

The story of salmon and intertwined but separately that of Alaskan fish hatcheries are really fascinating. The life cycle of a salmon begins as a hatchling in clear mountain streams hardly a few fingers deep. The majority of its life is in the ocean, some traveling as far as Japan. Then, just before it dies it returns to where it was born to spawn. 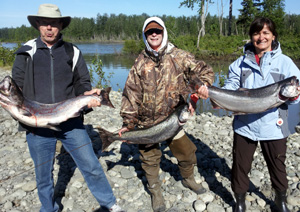 We had five fisherfolks today, and two ladies (Pat Herman and Cathy Tschannen) and one gent (Mark Frankel) each landed king salmon about 25 pounds each. I’ve had excellent luck with king in the Talkeetna area over the years, but it’s getting more difficult.

Alaska DFG closed the Talkeetna River this year because the King “statement” hadn’t been reached last year. That’s jargon for a minimum number returning to their spawning grounds to breed and die, and several years ago it fell to below 12,000 on the Talkeetna.

There are lots of different speculations as to why: everything of course from global warming to blaming the fish hatcheries, that had a boom year and are reported to have dumped a bunch of unused kings. But just south of Talkeetna is the Deshka River, and that was overflowing with kings … and fishermen!

Sockeye and King vie for favorite, both for taste and fight. My preference is King, and it runs now in the Talkeetna area.

But everyone enjoyed the famous Roadhouse sourdough pancakes! Myself, included, although I still think that Sourdough Sam’s in Fairbanks wins in the State. Third prize to the Snow City in Anchorage. And Roadhouse gets second.

But for presentation, there’s no contest: Roadhouse wins. For atmosphere, sides, coffee and the incredible variety of home-baked pastries and pies, Roadhouse wins.

We actually began our Prince William cruise Sunday, but there’s no internet or cell reception for the whole week. So I’ll be preposting stories that happened where we expect to be this year, from previous years, so… 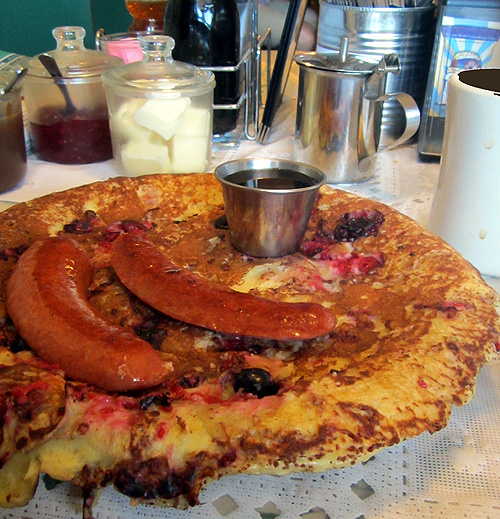