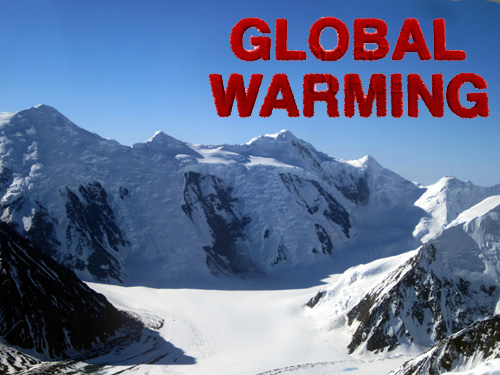 I swore everyone on the trip not to divulge what happened, today, so I’ll tell you. But it’s such a perfect example of why you have to be so very careful when planning a trip based on the referrals and anecdotes of your friends.

It’s the same problem with the many poorer guide books: things change. Often and much. What your friend saw in Florence that one beautiful winter eve is unlikely to ever happen, again. That outstanding condo in Aspen might have had a tree fall on it last week. 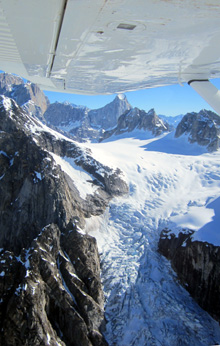 Even “the best time to go” is a dicey question, especially before you’ve highly defined exactly what your goals for the vacation are.

So when Mt. McKinley shows itself, it’s a bonus. You can’t plan a trip to Denali based on the best time to see Mt. McKinley all clear, because that just happens so seldom you better not even make it a goal.

But after your other goals are collected and understood, you can let the trip be tweaked by when the best chances for clarity are, and that’s now. As the weather changes from winter to spring, before the summer storms; and as summer winds down into the very short fall.

So that’s what I do, and this year we lucked out. Statistically, we shouldn’t expect to luck out for another long while, but it could be that global warming is minimizing the importance of statistics for this event, anyway.

I arranged this whole day, and in fact tomorrow, to give us as wide an opportunity as possible of flightseeing up to the mountain. The idea was if today didn’t work, we’d move here to Talkeetna in the southeast from Kantishna in the southwest, and then give it another try.

So we were ready at 8 a.m. this morning, and by 830a we were in the air, three Cessna 206s on what is absolutely the most intense, incredible and beautiful flightseeing of McKinley I’ve ever experienced. 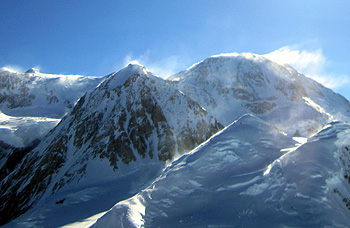 There was not a cloud in the sky, really. We could see from the Wrangell to the end of the Alaska Range, probably 350 miles (175 in each direction). What we thought were the beginnings of clouds on the top of South Peak were snow blizzards being whipped up by what our pilot estimated were 70-80 mph winds at the top near the surface.

But except for a few little bumps, our flight was silk smooth. This is the centennial for the first ascent of Mt. McKinley and there are about 600 climbers on the mountain right now. We flew over base camp and two of the other 16 camps climbers can use to get to the top. 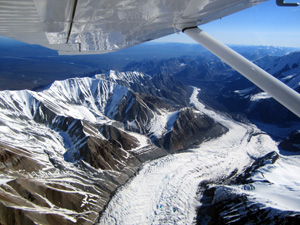 But in our ecstasy was some real dread from the locals. It’s unusual to be this clear, very unusual, but it’s unheard of to be this hot.

This weekend temperatures are forecast to go above 80F. The mean for all of June is 66F. Our pilot said the ice-line on McKinley ten years ago was 7,000′ and today is 11,000′. The Parks Service radioed all the climbers on McKinley yesterday that they could subsequently only climb during the night-time hours (which is kind of funny, since there is no night, now) to avoid the predicted myriad of avalanches expected.

Global warming isn’t good news. One of its spinoffs may have contributed to our fantastic day, but I wager any of us would have given it up to assure at least another year of no Sandy Repeat. 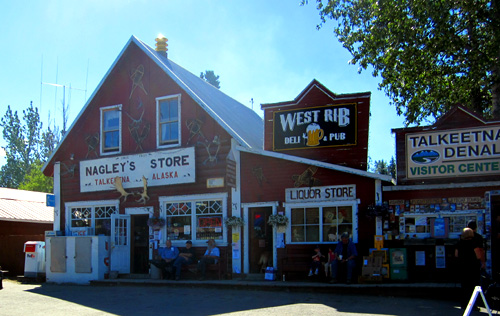