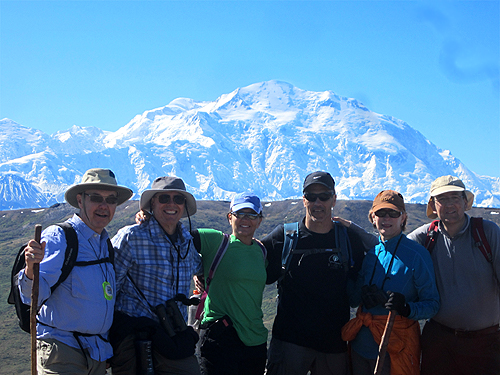 Denali never disappoints, but not because it ever shows itself. One guide said they average 5 days per season that the mountain is clear. This year we had two days of hardly a cloud in the sky. It’s scary.

And I’m not being facetious. The winter was long in Alaska this year, with the snow clearing not until May 18 in Fairbanks, and May 22 in Denali where we’re at, now. There was so much snow this year that early bird migrants like the violet-green swallow died trying to nest before the ice had melted out of the eves and underhangings. 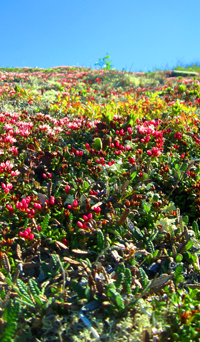 And the folks in Fairbanks at the Creamers Birder Reserve told us that once the snow was gone, “there was no spring,” that it leaped right to summer.

And that the bird response was to go into hyper drive, and late migrants or ones that were hanging back did double time to catch up to a more normal placement.

So today on Quigley Ridge on the far western edge of Denali National Park outside Kantishna six of us saw the most incredible display of wild flowers our guide, Kelly Cummings, had ever seen.

Kelly thought that perhaps the early wildflowers and the later wildflowers were all merging, because of the collapsed time before them as a result of the extended winter.

And they were illuminated in a totally cloudless sky.

Kelly said that this was the second day like this since she arrived the last week of May. And that in the previous year, there had been only 7 days like this the whole season (through mid-September).

We saw moose scat, moose tracks, heard from another backpacking group they had seen a mother grizzly and her cub, and we actually saw caribou and a short-tailed weasel. We hiked up about 1400 vertical feet through sections of thick alder, and over a lot of loose rock, until we saw the Alaska Range in its most spectacular. 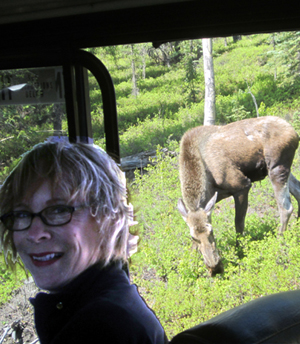 Mt. McKinley’s shorter North Peak filled the sky. Bill Banzhaf said to me, “That scares me.” We couldn’t see the true summit 850′ higher, the South Peak, because we were too close and the North Peak blocked the South Peak view. We were about 30 nautical miles from the summit.

Our 90-mile, just under 7 hour drive the day before from park headquarters to our lodge in Kantishna was equally rewarding.

The views from the ranger station were stupendous, and we saw 8 grizzlies, dozens of dall sheep, two moose practically licking the vehicle, and caribou. We even followed a bear on the road slowly, in a short line of vehicles that had no other option, until he was lured off road by a dead squirrel. Which he quickly consumed as we motored past.

Our fantastic two days comes to an end as we fly around the mountain to Talkeetna. 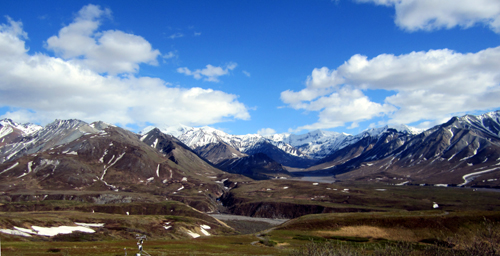