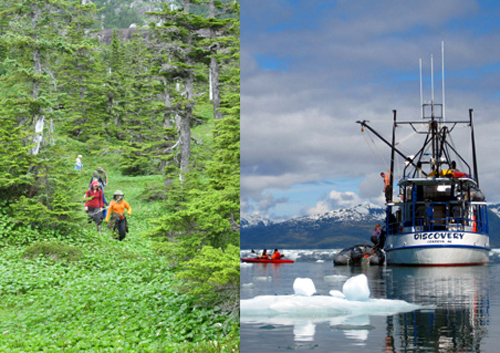 The last half of our Alaskan trip is a week-long private yacht cruise in Prince William Sound. It’s a great little ship, the Discovery, with only six very small cabins with two heads/showers, a superb team and outstanding cook.

Captain Dean knows the area like the back of his hand, and with Dean at the helm this little boat gets into those places in paradise nobody else can!

The cruise starts from Whittier, which look like a text book picture of a sailing village: lots of private vessels mixed in with commercial ones. After sumptuous hors d’oeuvres and an unlimited supply of beer and wine, we got off in the early afternoon.

Hardly twenty minutes out and still within site of Whittier we came upon a black-legged kitiweg colony of about 6000 birds nesting on a sheer rock wall, and below then were a handful of pigeon guillemots and above, glaucous gulls. From there we headed into open sea with a half dozen other vessels of various sizes and shapes and enjoyed consuming the final snacks as lunch.

In mid-afternoon we arrived Corolos Island and anchored, and had a very beautiful and enjoyable hike. The scenery is really quite beautiful: mossy tundra-like ground with a dozen or so types of wild flowers, mostly small and elegant; ferns and other weird plants mostly low to the ground. The dominant forest is sitka spruce.

The terrain rolled all over the place and finally up to a mountain top. Large blotches of snow were everywhere, laid like random frostings on a cake, with several cases of glacial melt that turned the water pure light blue. Tiny streams cut through the moss like fissures in an icefield.

The dogs – yes we have wonderful dogs aboard – scared up both gull and merganser chicks as we walked to the top of a water fall and then circled back around on what was about a 2½ hour spectacular initial walk.

Returned to Discovery, and while everyone was gleeing and gloating and drinking and relaxing Dean intersected some of the salmon fishing fleet, probably on their first 24-hour open of the season. The small boats strung out a net up to 900 feet long and 18 feet deep, and simply let it hang. The plastic monofilaments ensnared the salmon. They then rolled them up and immediately sold them to tender ships, which stood like ill-kept tug boats with a single crane waiting in the shadows to gobble up the fish.

The individual fisherpeople preferred dealing with these middle men, because their boats were too small to have refrigeration, for example. They preferred to just fish 24 hours round-the-clock. Most of the salmon coming in were returning to the nearby hatchery which seeds up to a quarter billion salmon annually; 8% survive and return to spawn.

Their normal routine is to come directly down the middle of the sound, hit the shore and then swim back up the shore. “Strayers” – perhaps guided by ancestral genetics – may work their way towards streams in the wild, but most of these are heading back to the hatchery area.

This run was mostly of chum salmon, which Matt the chef called the dog of salmon and not very tasty. But the huge numbers of them are used commercially for canned salmon and other high quantity salmon processed foods.

Because the better salmon aren’t of interest to these fishermen, we were able to get four giant sockeye salmon from a friend that Dean knew, Leo and his son, who were fishing and we stopped to greet.

Dinner was outstanding: salmon, asparagus, great salad, rice mixture and great home-made bread, with apple cobbler for desert! Fabulous and full, we all wandered to bed in the midnight sun as the boat docked in a quiet bay surrounded by sea otters and jelly fish.