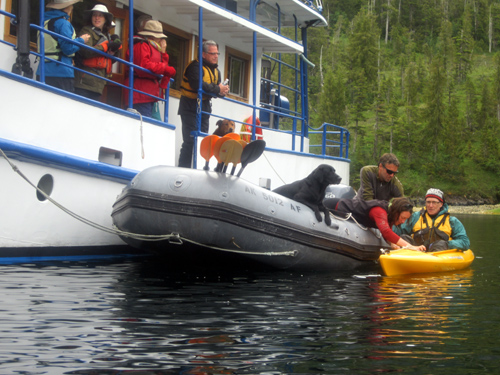 We had tied up just outside Inuikiak Inlet and as we were eating breakfast Captain Dean sailed a very short way into adjacent Cedar Bay, where we had our first kayaking experience. It was a beautiful bay with several different inlets and smaller islands and several streams, one of which had salmon running slightly in it.

Immediately I spotted a junco singing on the top of a dead tree as I kayaked close to the shore. Then later pelagic cormorants, marbled muirlets, common loons, a great blue heron (which is unusual for here), glaucous gulls (of course) and a pair of nesting arctic terns. But in the forests I heard multiple kinds of warblers and at least one type of thrush.

We kayaked for nearly two hours and everyone seemed to do fine despite the first-time experience for several. Lunch was excellent, a needle pasta salad with peas and carrots and a stromboli.

The rest of the afternoon was peaceful and pleasant sailing, especially since the crew was so pleased and the weather was so nice. We spotted a whale or two, lots of sea otters and a tranquil sailing in the open sea. Gregg and I spent a lot of time on the bow just sitting and watching.

Captain Dean kept sailing virtually right through dinner and after dinner we took the zodiacs into Sheep Bay (better were it named Bear Bay) where the tide was just perfect for what Dean wanted to do.

There was a wide river that was quite shallow, and at high tide it flowed in and at low tide it flowed out, and at high tide would be high enough to take the zodiac’s engine. It was a beautiful bay with towering, heavily forested sides that gave an impression of exploring a canyon, except that the main river ended at several very shallow, small clear salmon streams. And the salmon were jumping madly (silver salmon).

The first bear spotted was walking down the stream to the face with the river, but he also spotted us and was very shy. Dean explained this was a hunting area. So he cut the engine and we simply drifted and there were tons of bald eagles, many near nests with chicks.

We drifted further to the other salmon stream and there spotted a second bear. (Both were brown, grizzlies; one was brown, the other grey.) Then we motored over to a different part of the river lake and it was like silver salmon popping in a popcorn popper there were so many.

But as soon as the tide changed, we started out because it was a critical depth for the zodiac. Got back to the ship and most felt it was really a special overall experience. Dessert was waiting, Dean’s famous chocolate cake: exterior syrupy chocolate interior with whipped cream. Absolutely excellent.