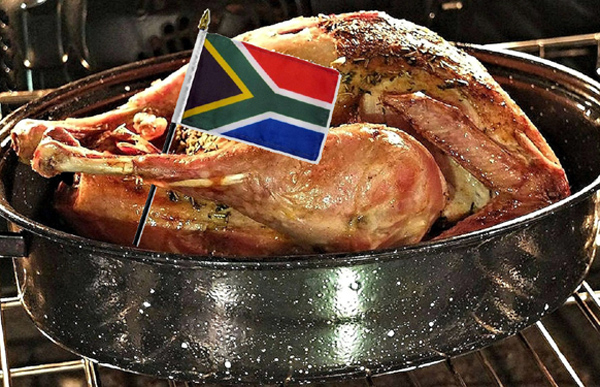 Below are some of my favorite parts:

“Everything at this time of year smells of cinnamon. They even pump it into shopping malls.

Apparently most Americans don’t know how to roast a whole chicken, so about two weeks before Thanksgiving millions of people freak out… National nervous breakdown time.

I experienced my first Thanksgiving nearly 40 years ago in Cape Town. A friend married a guy from New York, who decided to celebrate Thanksgiving with a bunch of us barbarians in the faraway southern hemisphere.

I attended another Thanksgiving hosted by the US Embassy’s cultural attache in Joburg. Just a few weeks earlier the cultural attache had taken the US ambassador (a deeply religious Southern Baptist Republican) and his wife to see my play at the Market Theatre. The play was called Weird Sex in Maputo.

They sat right in the front row, CIA security detail and all. At one point during the play, about two metres from their noses, a stark-naked Guy Delancy did a 10-minute monologue about the meaninglessness of it all. It ended with a mostly unclad Guy and Megan Kruskal stumbling drunkenly around the stage and having sex with a wine bottle. Watching from the lighting box, I thought the ambassador and his wife were going to have strokes. So my second Thanksgiving turned out to be pretty awkward as well. I sat through the whole meal freaking out, convinced they were going to withdraw my US visa on the grounds of moral corruption.

Well, I did make it to Chicago, and after 30 Thanksgivings, I still find it an awkward holiday. Thanksgiving at friends was always a potluck affair. Maybe it’s the old Afrikaanse boere tannie in me, but potluck dinners are one of my pet hates. I believe that if I invite you to my house for a meal, I feed you. It’s a matter of pride.

The first Thanksgiving with the in-laws was spent in Madison, Wisconsin. As Midwest as it gets. One of my main problems with Thanksgiving dinner is the timing. It’s usually at 3pm or 4pm, which is too late for lunch and too early for dinner. All the gals, as they say here, gather in the kitchen and the men watch football on the huge TV. I don’t watch football,

At some point I ended up on the back porch with a few of the men, and it really is true: American men don’t converse. I decided to make a joke about rugby versus football, but my dry, off-colour South African humour clearly did not hit the spot. The men just stood there staring at me. By the time we sat down to dinner, I was truly strung out – only to be confronted by dry, over-cooked, tasteless turkey, out-of-the-box mash potato, green-bean and mushroom-soup casserole with Corn Flakes and out-of-a-box fried onions on top, sweet-potato and marshmallow casserole, weird “stuffing” from a bag that never saw the inside of a turkey, jello salad, instant mac and cheese, and cranberry sauce from a can. What on earth were they doing in the kitchen for five hours?

And now, the turkey. You may have gathered by now that I’m not a big fan. There’s the sheer size of a turkey. An ordinary kitchen with an ordinary stove is just not set up to handle a 10kg to 12kg bird. You need a small bathtub.. For a 10kg bird, you’re looking at five hours in the oven. Inevitably, you are going to end up with mostly dry meat, no matter how much you baste.

When I used to cook turkeys I always thought the stuffing was the best part. Truth is, most Americans don’t stuff their turkeys in the first place. Stuffing is something you buy in a bag and cook in a casserole dish separately. And to go with that, there are the traditional side dishes – a bit like bland baby food. Soggy stuffing. Green-bean casserole. Instant mash potatoes. Mac and cheese out of a packet. Sweet-potato and marshmallow casserole. Everything casserole style. And last, but not least, there’s also jello salad. Jello salad is jello made in a mould with added canned pineapple and grated carrots. You can basically add anything to it, even pretzels. Some people even add mayonnaise or salad dressing. Not kidding.

And, to crown it all, there’s pumpkin pie, made with out-of-a-can pumpkin, pumpkin spice and topped with a nice aerosol squirt of Reddi Whip. On a recent shopping trip to buy some of the ingredients mentioned above for a photograph, I noticed Starbucks advertising pumpkin-spice lattes. In the grocery store I found pumpkin-spice-latte popcorn. I didn’t buy any. There were even pumpkin-spice tortilla chips. I swear.

I have spent quite a bit of time looking through old South African cookbooks but can’t find anything remotely similar to traditional Thanksgiving side dishes. Overcooked vegetables? Sure. But not with marshmallow toppings.

Probably the most American aspect of Thanksgiving is the willingness of most Americans to blur the lines between the traditional and the commercial. And through it all wafts that ever-present smell of synthetic pumpkin spice. It’s going to be around until after Christmas, so better get used to it. The official smell of the American shopping mall Holiday Season. Ja nee, mense. Happy Thanksgiving!”